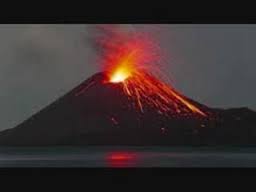 A volcano is a mountain that opens downward to a pool of molten rock below the surface of the earth. When pressure builds up, eruptions occur. Gases and rock shoot up through the opening and spill over or fill the air with lava fragments. Eruptions can cause lateral blasts, lava flows, hot ash flows, mudslides, avalanches, falling ash and floods. Volcano eruptions have been known to knock down entire forests. An erupting volcano can trigger tsunamis, flash floods, earthquakes, mudflows, and rockfalls.

A volcano is a rupture on the crust of a planetary mass object, such as the Earth, which allows hot lava, volcanic ash, and gases to escape from a magma chamber below the surface. Volcanoes are formed when magma from within the Earth’s upper mantle works its way to the surface. At the surface, it erupts to form lava flows and ash deposits.

Earth’s volcanoes occur because the planet’s crust is broken into 17 major, rigid tectonic plates that float on a hotter, softer layer in the Earth’s mantle. On Earth, volcanoes are generally found where tectonic plates are diverging or converging. Volcanoes can also form where there is stretching and thinning of the crust’s interior plates. Volcanism away from plate boundaries has also been explained as mantle plumes. Volcanoes are usually not created where two tectonic plates slide past one another.

Erupting volcanoes can pose many hazards, not only in the immediate vicinity of the eruption. One such hazard is that volcanic ash can be a threat to aircraft, in particular, those with jet engines where ash particles can be melted by the high operating temperature; the melted particles then adhere to the turbine blades and alter their shape, disrupting the operation of the turbine. Large eruptions can affect temperature as ash and droplets of sulfuric acid obscure the sun and cool the Earth’s lower atmosphere (or troposphere); however, they also absorb heat radiated up from the Earth, thereby warming the upper atmosphere (or stratosphere).

The most common perception of a volcano of a conical mountain, spewing lava and poisonous gases from a crater at its summit; however, this describes just one of the many types of volcano. The features of volcanoes are much more complicated and their structure and behavior depend on a number of factors. Some volcanoes have rugged peaks formed by lava domes rather than a summit crater while others have landscape features such as massive plateaus. Vents that issue volcanic material (including lava and ash) and gases (mainly steam and magmatic gases) can develop anywhere on the landform and may give rise to smaller cones.

Must Read: Valuable facts to know about Mars Planet

The Earth’s crust is made up of huge slabs called plates, which fit together like a jigsaw puzzle. These plates sometimes move. The friction causes earthquakes and volcanic eruptions near the edges of the plates. The theory that explains this process is called plate tectonics.

The world’s largest, active volcano is Mauna Loa in Hawaii, where famous coffee is grown in the rich volcanic soils. Mauna Loa is 13,677 feet above sea level. From its base below sea level to its summit, Mauna Loa is taller than Mount Everest.

There are several extinct volcanoes on Mars, four of which are vast shield volcanoes far bigger than any on Earth. They include Arsia Mons, Ascraeus Mons, Hecates Tholus,  Olympus Mons, and Pavonis Mons. These volcanoes have been extinct for many millions of years, but the European Mars Express spacecraft has found evidence that volcanic activity may have occurred on Mars in the recent past as well.

Jupiter’s moon Io is the most volcanically active object in the solar system because of  tidal interaction with Jupiter. It is covered with volcanoes that erupt, sulfur dioxide and silicate rock, and as a result, Io is constantly being resurfaced. Its lavas are the hottest known anywhere in the solar system, with temperatures exceeding 1,800 K (1,500 °C). In February 2001, the largest recorded volcanic eruptions in the solar system occurred on Io. Europa, the smallest of Jupiter’s Galilean moons, also appears to have an active volcanic system, except that its volcanic activity is entirely in the form of water, which freezes into ice on the frigid surface. This process is known as cryo volcanism and is apparently most common on the moons of the outer planets of the solar system.

The Deadliest Earthquakes of the World

Facts to know about Earthquakes