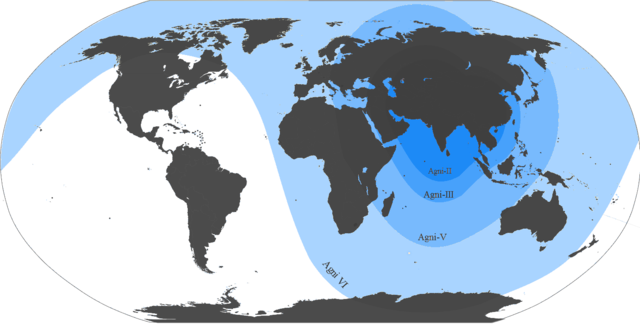 Agni Missile – I, with a solid-fuel first stage technology, was first tested at the Interim Test Range in Chandipur in 1989. The latest missile test occurred on 13 July 2012, when India test fired Agni I successfully at Wheeler Island off Orissa coast.

Weighing 12 tons with a length of 15 meters, Agni-1 has a range of 700–1250 km and is capable of carrying a conventional payload of 1,000 kg or a nuclear warhead at a speed of 2.5 km/s.
Agni-I is used by the Strategic Force Command (SFC) of the Indian Army. On April 11, 2014 the missile was test fired for the first time in a night trial exercise to its full range of 700 km from the Wheeler Island off the Odisha coast.

Agni Missile – II with a range of 2,000–2,500 km is 20 meters long, has a diameter of one meter, and weighs around 18 tons. The Agni-II is a medium range ballistic missile (MRBM) with two solid fuel stages and a Post Boost Vehicle (PBV) integrated into the missile’s Re-entry Vehicle (RV).

The 2000 km range nuclear weapon capable missile, already inducted into country’s arsenal, was successfully launched as a training exercise by the Strategic Forces Command on 9 August 2012. India on 7 April 2013 conducted its latest test of its nuclear capable Agni-II strategic ballistic missile from a missile testing range in Odisha. The test was conducted from Wheeler’s Island in Bhadrak district.

Agni  Missile – III—an intermediate-range ballistic missile that is capable of nuclear weapons delivery. It was designed and developed by the Advanced Systems Laboratory (ASL), a unit of DRDO, which was formed in September 2001 with its main objective being the development of large-sized rocket motors.

The missile is likely to support a wide range of warhead configurations, with a 4,500 km range and a total payload weight of 2490 kg. Agni-III was tested on 12 April 2007, this time successfully, again from Wheeler Island. On 7 May 2008 India successfully test fired this missile.

Agni Missile – IV is a two-stage missile powered by solid propellant. Its length is 20 meters and launch weight 17 tons. It can be fired from a road mobile launcher. Agni IV can take a warhead of 1 ton. It is designed to increase the kill efficiency along with a higher range performance. Agni IV is equipped with state-of-the-art technologies, that includes indigenously developed ring laser gyro and composite rocket motor.

20 January 2014: The missile was test-fired in the actual weapon and road-mobile configuration of the Strategic Forces Command (SFC), from the launch complex-4 of the Integrated Test Range at Wheeler Island off Orissa coast. The missile traveled a vertical distance of 850 km and covered its full range of 4,000 km.

Agni Missile – V is a solid fueled intercontinental ballistic missile (ICBM) developed by Defence Research and Development Organisation (DRDO) of India. It will greatly expand India’s reach to strike targets more than 5,500 km away. Agni-V was first test fired on 19 April 2012 at 08:07 am IST from Wheeler Island off the coast of Orissa, the test was successful.

The 17.5-metre-long Agni-V would be a canister launch missile system so as to ensure that it has the requisite operational flexibility and can be swiftly transported and fired from anywhere. Agni-V weighs around 49 tons.
The second test launch of Agni-V was successfully done on 15 September 2013 at 08:43 am IST from Wheeler Island off the Orissa coast. The next test launch of Agni-V missile scheduled to be carried out in 2014 is to be of canisterized version.

Agni  Missile – VI is an intercontinental ballistic missile reported to be in early stages of development by India. It is to be the latest and most advanced version among the Agni (missile) program. It will be capable of being launched from submarines as well as from land, and will have a strike-range of 8,000–10,000 km with MIRVed warheads.