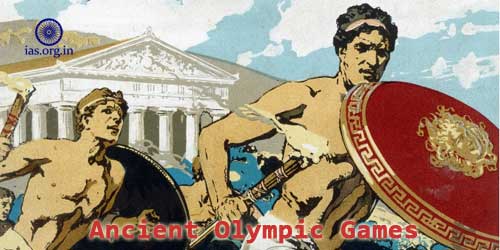 The ancient Olympic Games were primarily a part of a religious festival in honor of Zeus, the father of the Greek gods and goddesses. The festival and the games were held in Olympia, a valley near a city called Elis, a rural sanctuary site in the western Peloponnesos. The sanctuary was named in antiquity after Mt. Olympos, the highest mountain in mainland Greece. In Greek mythology, Mt. Olympos was the home of the greatest of the Greek gods and goddesses. The statue of Zeus at Olympia was counted as one of the seven wonders of the ancient world.

The ancient Olympic Games began in the year 776 BC at the first full moon after the summer solstice (around the middle of July) in honour of Zeus.  The winner of the first and only event, the stadion foot-race 600 feet long was Koroibos, a cook from the nearby city of Elis and from then every victory was recorded and each Olympiad was named after them.

An Olympiad was not only the name of the event itself but also of the period between games. According to some literary traditions, this was the only athletic event of the games for the first 13 Olympic festivals or until 724 BC. From 776 BC, the Games were held in Olympia every four years for almost 12 centuries. People from all over the Greek world came to watch and take part.

The most important religious ceremony of the event was the sacrifice of 100 oxen, known as the hecatomb, at the altar of Zeus, carried out when the sporting events at Ancient Olympic Games were over.

Must Read: Facts of Athens Games

The Ancient Olympic Games in Greece

The first written records of the ancient Olympic Games date to 776 B.C., when a cook named Koroibos won the only event–a 192-meter footrace called the stade (the origin of the modern “stadium”)–to become the first Olympic champion.

The ancient Olympics games were held every four years between August 6 and September 19 during a religious festival honoring Zeus. The Games were named for their location at Olympia, a sacred site located near the western coast of the Peloponnese peninsula in southern Greece.

Participation in the ancient Olympic Games was initially limited to freeborn male citizens of Greece; there were no women’s events, and married women were prohibited from attending the competition.

Decline of the Olympic Tradition

After the Roman Empire conquered Greece in the mid-2nd century B.C., the Ancient Olympic Games continued, but their standards and quality declined.

Although the ancient Olympic Games were staged in Olympia, Greece, from 776 BC to 393 AD, it took 1503 years for the Olympics to return. The first modern Olympics were held in Athens, Greece, in 1896. The man responsible for its rebirth was a Frenchman named Baron Pierre de Coubertin, who presented the idea in 1894. His original thought was to unveil the modern Games in 1900 in his native place Paris, but delegates from 34 countries were so enthralled with the concept that they convinced him to move the Games up to 1896 and have Athens serve as the first host.

Events at the Games

At the first one-day Ancient Olympic Games, the only event was a short sprint from one end of the stadium to the other. Gradually more events were added to make four days of competitions. They included wrestling, boxing, long jump, throwing the javelin and discus, and chariot racing. In the pentathlon, there were five events: running, wrestling, javelin, discus and long jump. One of the toughest events in ancient olympic games was the race for hoplites, in which men wore armour and carried shields. The running track was much wider than a modern one. Twenty people could run at once.

Winners were given a wreath of leaves, and a hero’s welcome back home. Winners might marry rich women, enjoy free meals, invitations to parties, and the best seats in the theatre.

The Olympics Through The Years

From the 8th century B.C. to the 4th century A.D., the Games were held every four years in Olympia, located in the western Peloponnese peninsula, in honor of the god Zeus. The first modern Olympics were held in Athens, Greece, in 1896. In the opening ceremony, King Georgios I and a crowd of 60,000 spectators welcomed 280 participants from 13 nations (all male), who would compete in 43 events, including track and field, gymnastics, swimming, wrestling, cycling, tennis, weightlifting, shooting and fencing.

Since 1994, the Summer and Winter Olympic Games have been held separately and have alternated every two years. All subsequent Olympiads have been numbered even when no Games take place (as in 1916, during World War I, and in 1940 and 1944, during World War II). The official symbol of the modern Games is five interlocking colored rings, representing the continents of North and South America, Asia, Africa, Europe and Australia. The Olympic flag, featuring this symbol on a white background, flew for the first time at the Antwerp Games in 1920.

Only men, boys and unmarried girls were allowed to attend the Ancient Olympic Games. Married women were not allowed into the Olympic Games. Any women caught sneaking in were punished! Women could own horses in the chariot race though.

Unmarried women used to celebrate their own festival at Olympia every four years. This was the Heraia, held in honour of Hera, wife of Zeus. Women could compete in running races, though only unmarried girls took part. Winners were awarded crowns of sacred olive branches, the same as men. As a rule Greek women did not go in for sport, unless they were Spartans.