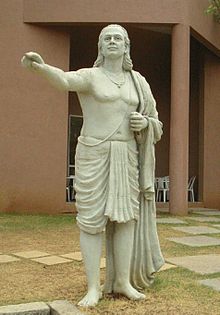 Aryabhata or Aryabhata I (476–550 CE) was the first in the line of great mathematician-astronomers from the classical age of Indian mathematics and Indian astronomy. His works include the Aryabhaṭiya (499 CE, when he was 23 years old) and the Arya-Siddhanta. The works of Aryabhata dealt with mainly mathematics and astronomy.

Aryabhatiya, a compendium of mathematics and astronomy, was extensively referred to in the Indian mathematical literature and has survived to modern times. The mathematical part of the Aryabhatiya covers arithmetic, algebra, plane trigonometry, and spherical trigonometry. It also contains  continued fractions, quadratic equations, sums-of-power series, and a table of sines.

The Arya-Siddhanta, a lost work on astronomical computations, is known through the writings of Aryabhata’s contemporary, Varahamihira, and later mathematicians and commentators, including Brahmagupta and Bhaskara I. This work appears to be based on the older Surya Siddhanta and uses the midnight-day reckoning, as opposed to sunrise in Aryabhatiya.

A third text, which may have survived in the Arabic translation, is Al ntf or Al-nanf. It claims that it is a translation by Aryabhata, but the Sanskrit name of this work is not known.

Aryabhatta was a famous Indian mathematician and astronomer, born in a place called Taregana, in Bihar (though some people do not agree with the evidence). Taregana (also spelled as Taragna) which literally means songs of stars in Bihari, is a small place situated nearly 30 km from Patna, which was then known as Kusumpura later Pataliputra, the capital of the Gupta Empire.

This is the very empire that has been dubbed as the “golden period in Indian history”. The best introduction to the genius of past is seen in the words of Bhaskara I who said, “Aryabhatta is the master who, after reaching the furthest shores and plumbing the inmost depths of the sea of ultimate knowledge of mathematics, kinematics and spherics, handed over the three sciences to the learned world”.

Aryabhatta had defined sine, cosine, versine and inverse sine back in his era, influencing the birth of trigonometry. His notable contributions to the world of science and mathematics include the theory that the earth rotates on its axis, explanations of the solar and lunar eclipses, solving of quadratic equations, place value system with zero, and approximation of pie (π). Aryabhatta was the first mathematician to detail both sine and versine (1 − cos x) tables, in 3.75° intervals from 0° to 90°, to 4 decimal places.

This great mathematical masterpiece of the past starts with 10 verse introduction, which is then followed by the mathematical section which is written in 33 verses that give out 66 mathematical rules, but there is no proof to go with it. The mathematical part of the Aryabhatiya is about algebra, arithmetic, plane trigonometry and spherical trigonometry in addition to advanced mathematics on continued fractions, quadratic equations, sums of power series and a table of sines.

Some of the works of Aryabhatta include: