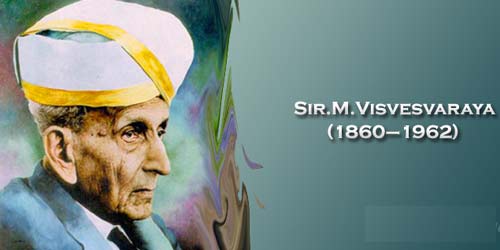 MOKSHAGUNDAM VISVESVARAYA: A BORN ENGINEER AND BUILDER OF MODERN INDIA

In pre independence situation, with inadequate facilities and in adverse conditions M Visvesvaraya created many economically viable constructions and also historical projects like KRISHNARAJA SAGAR dam of Mysore, OSMAN SAGAR of Hyderabad and so on. He always aimed of modernising India and contributed his best for the same.

He served as an Engineer of varios cadres, Diwan of Mysore and Board of Director of TATA group of companies and utilised every single opportunity for the progress of the country. The Government of India celebrates the birthday of VISVESYARAYA, 15th September of every year as THE ENGINEERS DAY.

Mokshagundam Visvesvaraya was born into a family of four on 15th September 1860 in a village called MUDDENAHALLI of MYSORE princely state which was now in Karnataka. Even from his childhood, Visvesvaraya showed signs of engineering bent of mind. When Visvesvaraya was at thirteen, his father passed away and his family went into deep financial crisis.

Visvesvaraya, however managed his studies and obtained his bachelor’s degree fromCENTRAL COLLEGE, Bangalore in 1881. During his college, he used to take tuitions in the morning and attend the college afterwards to support his family. He always stood first in his studies and even attained rare scholarships too. At the age of 24, Visvesvaraya completed his engineering from the famous PUNE COLLEGE OF ENGINEERING.

CAREER AS AN ENGINEER:

M VISVESVARAYA joined the British Government as an ASSISTANT ENGINEER in Public works department of BOMBAY PRESIDENCY IN 1885. Since then, Visveyaraya started working very hard and always used innovative and novel ideas to solve the problems. In 1909, he joined Mysore state as chief engineer and also woked as diwan. Some of his achievements are:

Even after retirement as DIWAN OF MYSORE in 1919, Visvesvaraya continued his contributions as an engineer.

He also received many honorary doctorates, knighthood of the crown of the empire. In 1955, Indian government honoured M Visvesvaraya with the highest honour BHARAT RATNA. Finally, Visvesvaraya died at the age of 101 years in 1962.

The contemporary engineers of India should take MOKSHAGUNDAM VISVESVARAYA’S life as an inspiration and should remember his saying “NATURE NEVER EXCUSES LAPSES”.