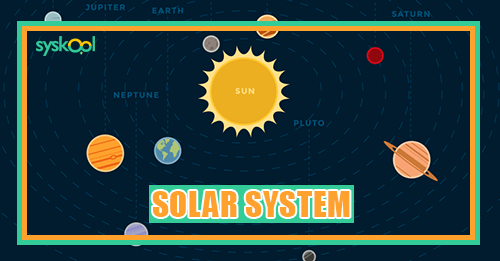 The Sun, the nine known planets, their 31 known satellites, a great number of asteroids, and some other bodies like comets and meteors constitute the solar system.
Must Read: The Planet Earth and the Universe

The outer surface of the Sun, called photosphere, has a temperature of about 6000 C and its interior temperature is about 13,000,000 C. Such a high temperature inside the sun give rise to thermonuclear reactions in which Hydrogen is converted into Helium.The heat produced in this reactions makes up the loss of heat by Sun`s radiation, thereby keeping the sun’s temperature constant and high.

These are the region on the Sun`s photosphere visible are irregular dark patches scattered on either side of sun’s equator, emitting strong magnetic field which disturbs wireless communication and produces magnetic storms on the earth.

A luminous ring sometimes observed around the sun or Moon called halo is caused by the reflection of light by ice crystals present in the atmosphere.

The bodies revolving around the sun are called planets.These are not self-luminous but shines by radiating the light received from the sun.The orbits of all planets are elliptical.Their sizes, speeds, and distances from the sun vary.

There are nine planets so far known. In order of their nearness to the sun, they are (i) Mercury, (ii)Venus (iii)Earth (iv)Mars (v)Jupiter (vi)Saturn (vii)Uranus (viii) Neptune (ix)Pluto.
Don’t Miss: Jupiter; The Largest Planet of System

Pluto is the planet farthest from the sun while mercury is the planet nearest to the sun.
Don’t Miss: Solar Eclipse Everything You Need to Know

Venus appearing as a brilliant crescent is the brightest known planet.

Jupiter is the heaviest planet (314.5 times heavier than the earth).

Planets with the largest number of satellites

Jupiter has the maximum number of satellites (69).
Must Read: