Bali and Copenhagen Summits of UNFCCC (CoP 13 and 15)

Bali and Copenhagen summits of UNFCCC COP 13, the meeting, which was held in December 2007, of 190 countries that are party to a UN treaty on climate change is known as Bali Meet.

In case you have missed earlier article – Climate Change, Technology and Energy Sustainability

The participating parties approved the Bali Roadmap as a two-year process for finalizing a binding agreement in 2009 in Copenhagen. 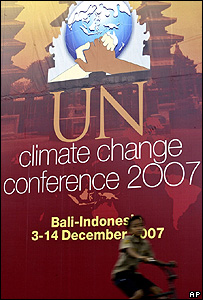 – Due to some serious disagreement between developing and developed countries, a legally binding agreement could not be finalized in COP 15 Copenhagen.

– Copenhagen accord is a non- binding agreement because the summit concluded with COP taking a note of Copenhagen agreement (a five nation accord- BASIC and US).

– The accord stressed that deep international cuts were needed to check the increase in global temperature to under two degrees Celsius.

– The accord stated that the developed nations (Annex 1) had agreed to set targets for reductions in their greenhouse gas emissions by 2020.

– Developing nations agreed to pursue nationally appropriate reduction strategy to slow the growth or their emission, but refused to commit on the reduction of their carbon output.

– Agreed a “goal” for the world to raise $100 billion per year by 2020. New multilateral funding for adaptation would be delivered with a governance structure.