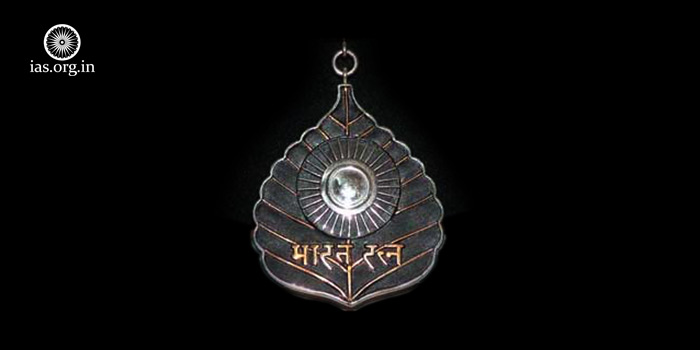 Bharat Ratna Award is India’s highest civilian award given for performance in highest order in any field of human Endeavour. Bharat Ratna award was introduced in 1954 and is awarded to 45 people till date among them 12 were awarded posthumously. Any person without distinction of race, occupation, position or sex is eligible for Bharat Ratna award.

Latest recipients are Pt. Madan Mohan Malaviya (posthumously) and Sh. Atal Bihari Vajpayee, bestowed in 2015. This award is not necessarily given every year in past 64 years it is given only 25 times.

The recommendations of the “2 Bharat Ratna” are made by the Prime Minister of India to the President of India and maximum three Bharat Ratna awards can be made in a year.

Before 2011 the Bharat Ratna given for Artistic, Literacy, Scientific Achievements, as well as “Recognition of public service of the highest order”. But in December 2011 Government of India has modified the criteria for Bharat Ratna Award. Now sportsperson can also win Bharat Ratna Award.

Must Read: 45 Bharat Ratna Recipients – know why they are most deserving

A press communique was released from the office of the secretary to the President of India to institute two civilian awards—Bharat Ratna and the three-tier Padma Vibhushan, classified into “Pahela Warg”, “Dusra Warg” and “Tisra Warg”.

The recipient receives a Sanad (certificate) signed by the President and a peepal-leaf–shaped medallion; there is no monetary grant associated with the award. The recipients of the Bharat Ratna rank seventh in the Indian order of precedence, but are constitutionally prohibited from using the award name as a title.

The obverse side of the medal was designed to have the Sun with the rays embossed in the centre with the words “Bharat Ratna” written in Hindi language in silver-gilt on the upper edge and a wreath on the lower edge. The reverse side was designed to have the Emblem of India in the centre with national motto of India “Satyameva Jayate” (Truth alone triumphs) written in Hindi in silver-gilt on the lower edge.