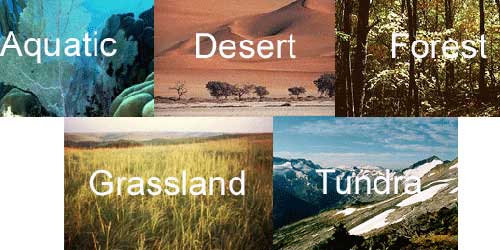 Biomes are a way to divide the Earth‘s surface. These divisions are based on climate patterns, soil types, and the animals and plants that inhabit an area. There are biome on dry land and in water. Every inch of the Earth’s surface is a part of one or more biomes.

There are a couple of different ways to look at the number of biomes. Some like to divide biomes into five basic types: aquatic, forest, desert, tundra, and grassland. These five types of biome can be further divided by the differences in seasons or animal and plant species.

Must Read: Types of Indian soils and their distribution

The aquatic biome consists of any part of Earth that is covered with water. This includes freshwater and salt water. The aquatic biome can be further divided into freshwater biomes, marine biomes, wetland biomes, coral reef biomes, and estuaries. These subdivisions are based on the salt content of the water, the aquatic plants that live there, and the aquatic animals that thrive there.

Tundra biomes are the coldest places on Earth. They are similar to a cold desert except they receive less rainfall and contain different animals and plants. Even though the conditions are harsh, the tundra biome does have plant and animal habitats.

The grassland biome is made of rolling hills of various grasses. They receive just enough rain to sustain grass but not enough to grow many trees. There are a few trees that will grow in grasslands but sporadic wildfires keep them under control. There are two types of grassland, the savannas, and temperate grasslands.

There are many different types of biomes on the Earth’s surface. Each biome is unique in that it has its own weather and temperature patterns, plant species, and animal species. It is important to understand the uniqueness of each biome in order to understand why certain animals and plants thrive in one area yet would not be able to survive in another. Biomes are also very sensitive and each has special needs in order to maintain itself. Although there are many types of biome, they each fit into two categories: aquatic biomes and terrestrial biomes.

The freshwater biome includes areas of land covered in water that contains less than 1% of salt water. This includes rivers, lakes, ponds, and wetlands such as swamps and marshes.

Terrestrial biomes are those that occur on dry land. These biome differ in their climate, vegetation, and animal life. There are many types of terrestrial biome but the main biomes include tundra biome, desert biome, forest biome, and grassland biome.