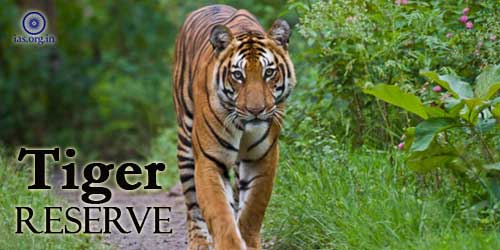 The Centrally administered scheme Project Tiger was launched in April, 1973 with the objective “to ensure maintenance of a viable population of Tigers in India for scientific, economic, aesthetic, cultural and ecological values, and to preserve to all times, areas of biological importance as a national heritage for the benefit, education and enjoyment of the people”.

The “in-principle” approval has been accorded by the National Tiger Conservation Authority for creation of new tiger reserves, and sites are:
Besides this states have been advised to send proposal for declaring following areas as Tiger Reserves:

The revised project tiger guidelines by National Tiger Conservation Authority have been issued to States for strengthening tiger conservation, which apart from on-going activities, inter alia, including funding support to states for enhanced village relocation/rehabilitation package for people living in core or critical tiger habitats (from One lakh/family to Ten lakh/family), rehabilitation/resettlement of communities involved in traditional hunting, mainstreaming livelihood and wildlife concern in forests outside tiger reserves and fostering corridor conservation through restorative strategy to arrest habitat fragmentation.
A scientific methodology of estimating tiger (including co-predator, pray animals and assessment of habitat status) has been evolved and mainstreamed. The findings of this estimation/assessment have been the benchmark for future tiger conservation strategy. An area of 31,407.11 sq. km. has been notified by 16 Tiger States (out of 17) as core or critical tiger habitat under section 38V of the Wildlife (Protection) Act, 1972, as amended in 2006 (Andhra Pradesh, Arunachal Pradesh, Assam, Chhattisgarh, Jharkhand, Karnataka, Kerala, Madhya Pradesh, Maharashtra, Mizoram, Odisha, Rajasthan, Tamil Nadu, Uttarakhand, Uttar Pradesh and West Bengal). The State of Bihar has taken a decision for notifying the or critical tiger habitat in its newly constituted tiger reserve (Sanjay National Park and Sanjay Dubri Wildlife Sanctuary).
Must Read:
Wildlife Corridors – Elephant Lifeline(s) – of Coimbatore
Ken-Betwa Project : Panel warns of Ecological Harms
Agasthyamala Biosphere Reserve (ABR) Listed by UNESCO