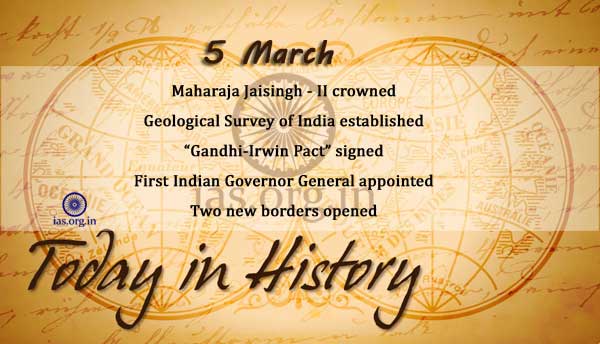 Maharaja Jaisingh-II crowned as King of Jaipur kingdom and sat on Amber throne.

Geological Survey of India was established in Calcutta.

Harishchandra Sakharam Bhatwadekar Save Dada alias, who filmed the felicitation function of Wrangler R. P. Paranjapye, was born. This film was titled as “”The Fresh Indian Regular of Cambridge University.”” He was the First Short Documentary Film Maker of Inndi

Shushila Didi, great freedom fighter, was born at Datton Chuhad village, Punjab. She is remembered for her association in the revolutionary activities of Bhagat Singh.

The indigenously-built multi-barrel rocket launcher ”Pinaka” is successfully test-fired at Chandipur-on-sea in Orissa.