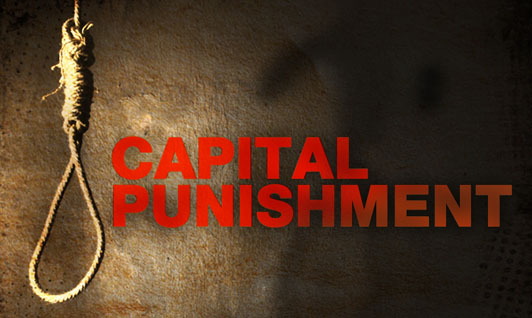 Capital punishment also called Death Penalty, is when a government or state executes (kills) someone, usually because he or she has done a serious crime, such as murder.

Use of capital punishment is growing in India in the 2010s due to both a growth in right wing politics and due to anger over several recent brutal cases of rape.

Punishment is as old as government itself. Capital punishment or in easier terms the death penalty is applied to people who have done various forms of bad behavior. Method of execution are crucifixion, stoning, drowning, impaling, and beheading but in such present time execution is formed by lethal gas or injections, electrocution, hanging, or shooting.

Most supporters of death penalty believe that it is justified on one or more of the following grounds: as means of revenge/justice, as a deterrent to others, to prevent any danger of re-offending and it is cheaper than life imprisonment where criminal will stay whole life in prison on tax payers’ money.

Their execution will not guarantee end of further terror attacks against the country but would rather be used by the extremist masterminds to instigate violence and more hatred against India.

The death penalty has no place in modern society, so nobody’s surprised that it’s still used in India, China and the United States. There is a punishment worse than death; make the convict endure endless discussion about capital punishment. The rigorous life in prison would be a far worse punishment than a swift death and in the case of terrorists, they took the job fully prepared to die for their cause. The death penalty serves only to assuage a misplaced public sense of retribution and as a tool for pandering politicians.

In 1977, The Supreme Court ruled that a state cannot apply the death penalty or the crime of raping an adult woman because it violates the proportionality requirement. The Court came to this conclusion by considering objective indicia of the nation’s attitude toward the death penalty in rape cases. At the time only a few states allowed for executions of convicted rapists.

In 2005, the Supreme Court invalidated the death penalty for all juvenile offenders. The majority opinion pointed to teenagers’ lack of maturity and responsibility, greater vulnerability to negative influences, and incomplete character development. The Court concluded that juvenile offenders assume diminished culpability for their crimes.
Nearly all countries in the world prohibit the execution of individuals who were under the age of 18 at the time of their crimes; since 2009, only Iran, Saudi Arabia, and Sudan have carried out such executions. Executions of this kind are prohibited under international law.