The Indian constitution declares India as federal. That means it is a union of states where power is divided between centre and states as per the procedure mentioned in the constitution. In this two tier system, the central government have the final say in all the matters and in this way India is federal but unitary. The different relations between centre and state are as follows:

Articles 245 to 255 in the Indian constitution deal with the legislative aspect of centre states relation. Legislation means the power of making a law which is enforceable. Both the central and state governments in India have the power to make laws. But, the matters on which they can make laws differ. While the centre can make laws applicable to the nation as a whole, the states have the power to make laws applicable in their own territory that too in some matters only. Some matters need both the centre and state legislations. They are as given:

Union list Include the matters on which only central government can make legislations. The state governments are bounded by these legislations. Union list has 100 subjects on which it has exclusive authority to make laws. These include Foreign affairs, Defence, Armed forces, Communications, Posts and telegraphs, inter-state trade and commerce and so on.

State list includes the matters on which the respective state governments can make laws. The state list consists of 61 subjects which include Public order in the state, police, administration of justice, prisons, Local Governments, agriculture and so on. However, under some situations such as emergency, The Centre will take over the State list as well.

The Concurrent list includes the subjects on which both central and state governments have the power to make laws. The Concurrent list has 52 subjects which include Criminal and Civil procedure, marriage and divorce, economic and special planning, trade unions, labour welfare electricity, newspapers, books and printing presses,population control and so on. However, the centre has the sole powers to take over the concurrent list if needed.

On all the subject matters mentioned above, finally, the central government have the powers to take over every subject in any situation. Such is the power given to the centre by the Indian Constitution.

Also read: Legislative Relation Between Centre and State in India

Even some matters like railways, central excise, income tax, post and telegraph and so on are directly administered by the central government. Hence, in administrative matters also Centre has the final say. 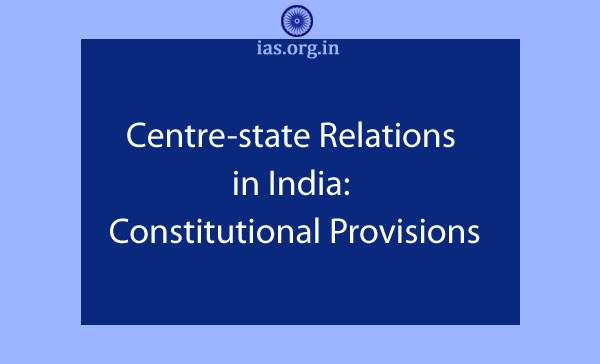 Articles 268 to 293 in the Indian constitution deal with the financial aspect of centre-state relations in India. It mainly deals with the imposition and collection of taxes. These are categorised as follows:

In addition to this, Centre also gives many grants and loans to the states from time to time.

When we observe the centre-state relations in India, the power position given to the central government is clearly known. Hence, Indian political system is federal but unitary.