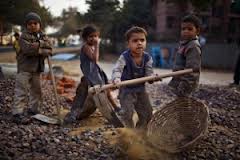 Child labour refers to the employment of children in any work that deprives children of their childhood, interferes with their ability to attend regular school, and that is mentally, physically, socially or morally dangerous and harmful. This practice is considered exploitative by many international organisations. Legislations across the world prohibit child labour. These laws do not consider all work by children as child labour; exceptions include work by child artists, supervised training, certain categories of work such as those by Amish children, some forms of child work common among indigenous American children, and others.

Child labour is the practice of having children engages in economic activity, on part or full-time basis. The practice deprives children of their childhood, and is harmful to their physical and mental development. Poverty, lack of good schools and growth of informal economy are considered as the important causes of child labour in India.

During the Industrial Revolution, children as young as four were employed in production factories with dangerous, and often fatal, working conditions. Based on this understanding of the use of children as labourers, it is now considered by wealthy countries to be a human rights violation, and is outlawed, while some poorer countries may allow or tolerate child labour. Child labour can also be defined as the full-time employment of children who are under a minimum legal age.

India has a federal form of government, and child labour is a matter on which both the central government and country governments can legislate, and have. The major national legislative developments include the following:

The Factories Act of 1948: The Act prohibits the employment of children below the age of 14 years in any factory. The law also placed rules on who, when and how long can pre-adults aged 15–18 years be employed in any factory.

The Mines Act of 1952: The Act prohibits the employment of children below 18 years of age in a mine factory.

The Child Labour (Prohibition and Regulation) Act of 1986: The Act prohibits the employment of children below the age of 14 years in hazardous occupations identified in a list by the law. The list was expanded in 2006, and again in 2008.

The Juvenile Justice (Care and Protection) of Children Act of 2000: This law made it a crime, punishable with a prison term, for anyone to procure or employ a child in any hazardous employment or in bondage.

The Right of Children to Free and Compulsory Education Act of 2009: The law mandates free and compulsory education to all children aged 6 to 14 years. This legislation also mandated that 25 percent of seats in every private school must be allocated for children from disadvantaged groups and physically challenged children.

Children who work fail to get necessary education. They do not get the opportunity to develop physically, intellectually, emotionally and psychologically. In terms of the physical condition of children, children are not ready for long monotous work because they become exhausted more quickly than adults. This reduces their physical conditions and makes the children more vulnerable to disease. Children in hazardous working conditions are even in worse condition. Children who work, instead of going to school, will remain illiterate which limits their ability to contribute to their own well being as well as to community they live in. Child labour has long term adverse effects for India.

A National Policy on Child Labour was formulated in 1987 to focus on rehabilitating children working in hazardous occupations. The Ministry of Labour and Employment had implemented around 100 industry-specific National Child Labour Projects to rehabilitate the child workers since 1988.

Pratham is India’s largest non-governmental organisation with the mission ‘every child in school and learning well.’ Founded in 1994, Pratham has aimed to reduce child labour and offer schooling to children irrespective of their gender, religion and social background. It has grown by introducing low cost education models that are sustainable and reproducible.

Child labour has also been a subject of public interest litigations in Indian courts.