There exist a variety of ecosystem on the planet Earth and Coral reefs are one of them. The coral reef is an integral part of the marine environment as one-third of all marine fish species lives on coral reefs. They are held compactly underwater due to the secretion of calcium carbonate by corals. Polyps in a cluster form the basis of corals. Polyps belong to an animal group called Cnidaria. Stony structures of corals combine to form coral reefs. They are found in sub-tropical and tropical oceans.  Warm, clear and shallow waters are the most suitable for the formation of coral reefs. There also exist cold water corals in deep cold water where temperature varies from 39 -55 degrees Fahrenheit. They are often given the title of ‘tropical rainforests of the ocean ’ as like rainforests they form the part of the habitat for different marine species like fish, sponges, molluscs, crustaceans etc. 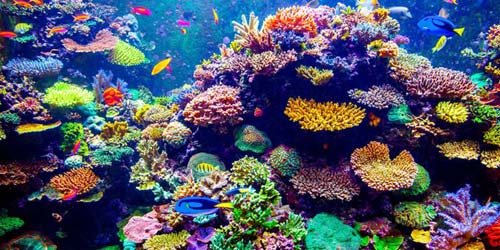 Coral has a symbiotic relationship with zooxanthellae, a microscopic algaes which live on coral and it provides assistance to coral in nutrient production through its photosynthetic activities. Corals consist of clear white tissues but they give a beautiful colorful appearance due to the presence of zooxanthellae which lives withing their tissues. Corals are of two types, hard and soft. Only hard corals are able to build reefs. Polyps grow and die leaving their limestone skeletons behind which helps in the building up of a reef. Coral reefs can be classified into fringing reefs that are continuous with the shore, patch reefs that are isolated and discontinuous, barrier reefs that run parallel to coastlines and arise from submerged ocean shelf platforms and atoll reefs that are circular or semi-circular in shape.

Read Also: Biomes and its Types

The great barrier reef of Australia is the largest warm water reef and Rost reef off Norway is the largest cold water reef. In India coral reefs are found in Andamans and Nicobar, Gulf of Kutch, Gulf of Mannar and Lakshadweep.

The coral reefs are of great importance as they form natural protective barriers against erosion and storm surge. They are the largest biological producer of calcium carbonate and they provide an underlying layer to mangroves and they are one of the most productive ecosystems of the marine environment.

Unfortunately, this ecosystem is facing a major threat to its existence in the form of climate change, mining, dredging, sediment loading, intensive fishing and thermal pollution. Both natural and anthropogenic events are disturbing the formation of coral reefs. Natural disturbances include violent storms, flooding, high and low extreme temperatures etc.

The most visible negative effect is in the form of coral bleaching. It refers to the paling or bleaching of the colour of corals when the density of zooxanthellae starts declining and concentration of photosynthetic pigment falls and if this phenomenon is prolonged , the population of this microscopic algae fails to recover and eventually the host coral dies.

In order to protect coral reefs, Marine Protected Areas (MPAs) are coming up and they are responsible for fishery management and habitat protection. There also exist Coastal Ocean Monitoring and Prediction system (COMAPS) which assess the health of coastal waters and pollution related issues.