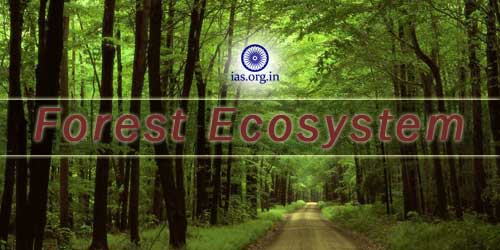 Structurally defined by its trees, shrubs, climbers and ground cover, forest ecosystem is formed by a community of planets. From a group of planted trees in orderly rows the natural vegetation is vastly different; in our national parks and wildlife sanctuaries are located the most ‘natural’ undisturbed forests. The landscapes, forming various types of forests, look very different from each other, and their distinctive appearances are considered as fascinating aspects of nature. Each type of forest forms a habitat for a specific community of animals that are accommodated to live in it.

The communities formed by animals and plants are specific to each forest type; examples are

Similarly in the context of animal communities:

The macrophytes (large) and the microscopic plants and animals constituted the biotic component.

The term animals envelops in itself species of mammals, birds, reptiles, amphibians, fish, insects and other invertebrates and variety of microscopic animals.

The abiotic or the non-living aspects of forests,as constituents of the forest ecosystem, are those aspects which have their effects on the vegetation of the forests from the outside, for instance, in this case the local temperature and the amount of rainfall, that vary according to the longitude, latitude and the soil type, determine the specific vegetation of the forests. It is so that the type of forest, in a forest ecosystem, depends on the abiotic at the site; the forest located on mountains and hills are different from those along the river valleys.

Types of forests in India

The ‘types’ of a forest can be ascertained by its abiotic factors such as climate and the soil characteristics of a region. In India forests can be broadly classified into coniferous forests and the broad-leaved forests.

Furthermore, according to the nature of their tree species, forests can also be classified into evergreen, deciduous, xerophytes or thorn trees, mangroves, etc. And not only this, in addition they can also be classified according to the most abundant species of trees such as Sal or Teak forests. Generally a forest is named after the first three or four most abundant three species.

Evergreen Forests: In the high rainfall areas of the North-Eastern India, Western Ghats and the Andaman and Nicobar Islands grow evergreen forests; these are the areas where the monsoon period lasts for several months, it extends to such an extend that some places, such as in southern India, even experience two monsoons.

An evergreen forest looks green throughout the year as evergreen plants shed a few of their leaves throughout the year, reflecting one of the most distinguished characteristics of the forest ecosystem. As the trees overlap with each other, forming a continuous canopy, very little light reaches down the forest floor; due to this very few shade-loving plants grow in the ground layer, of course in areas where some lights penetrated down through the closed canopy. The evergreen forest is full of animal lives and is very rich in insect life. The barks of the trees are covered in moss and the forest is very rich in orchids and ferns.

Deciduous Forests: In regions getting a moderate amount of seasonal rainfall that lasts for only a few months are found deciduous forests. Most of the forests, belonging to the forest ecosystem, in which teek trees grow are classified as deciduous forests. During the months of the hot summer and winter the deciduous trees shed their leaves and in March or April they grow vigorously in response to the ample rains and regain their fresh leaves just before the monsoon. As there are period of leaf-fall and canopy re-growth, the deciduous forest develops a thick undergrowth which light cannot penetrate and reach to the floor of the forest.

Coniferous Forests: In the Himalayan mountain region where temperatures remain low grow the coniferous forests. These forests are full of tall stately tree with needle-like leaves and downward-sloping branches from which snow can slip off them; these trees have cones instead of seeds  and called gymnosperms.

Mangrove Forests: Along the coast especially in the river deltas grow mangrove forests, the one of the most important forest ecosystem. The plants or these forests are particularly adapted to be able to grow in an amalgamation of fresh-water and saline. The plants grow effeminately in muddy areas covered with slit bought down by the rivers. The breathing roots, that mangrove trees have, emerge from the mudbanks.

Thorn Forests: They are found in the semi-arid areas of India. In these forests, sparsely distributed trees are surrounded by open grassy areas. Thorny plants, which are called xerophytic species, conserve water; some of the trees have small leaves while other species, having thick and waxy leaves, reduce water losses during transpiration. As the trees of thorn forests have long (fibrous) roots they reach water at great depths and the thorns enable them to reduce water loss and protect them from herbivores.

Broad-leaved Forests: This class of forests of the forest ecosystem includes several types of forests such as evergreen forests, deciduous forests, thorn forests, and magover forests. Broad leaved trees generally have large leaves of different shapes and are found in middle to lower altitude.

Threats to the forest ecosystem

No one deny the fact that we are over-utilizing forests resources that is an unsustainable way of using our natural resources as a whole. We are making more and more goods that are manufactured from raw materials procured from the forest, leading to forest degradation that can change the forest ecosystem into a wasteland. Illegal extraction of wood from many forests is leading us to a highly disturbed forest ecosystem.

The main causes behind the over-utilization of forest produce, that is a serious threat to the forest ecosystem in its entirety, are development activities such as rapid population growth, urbanization, industrialization and the increasing use of consumer goods.

Due to the growing requirements and resultedly the demands, of the agricultural land the forests are rapidly shrinking; it has been estimated that India’s forest cover has decreased from about 33% to 11% in the last century.

Forests are also lost by mining and building dams. As the forest resources are senselessly exploited, the canopy of the forest is opened up, the forest ecosystem is degraded, and wildlife becomes seriously threatened.

Don’t Miss: Biodiversity and Its Conservation