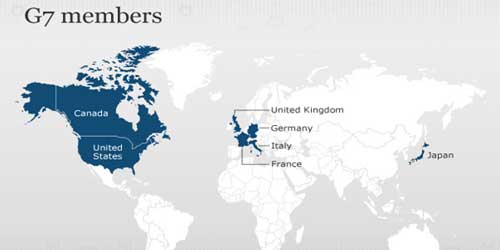 The Group of Eight (G8), now the Group of 7, is a club of advanced industrialized states that meets annually to discuss important economic, financial, and political issues. The first summit, held in Rambouillet in 1975. The summit was hosted by France that brought together representatives of six governments: France, West Germany, Italy, Japan, the United Kingdom, and the United States, thus leading to the name Group of Six or G6. The summit became known as the Group of 7 or G7 the following year with the addition of Canada. Full Russian participation at the 1998 Birmingham Summit marked the birth of the G8.

Russia, which was invited to join as the last member, was excluded from the forum by the other members on March 24, 2014, as a result of its involvement in the 2014 Crimea crisis in Ukraine. Russia was added to the group from 1998 to 2014, which then became known as the G8. Thus the group now comprises seven nations and will continue to meet as the G7 group of nations.

Group of 7 ministers also meet throughout the year, such as the G7 finance ministers (who meet four times a year), G7 foreign ministers, or G7 environment ministers.

The annual Group of 7 leaders summit is attended by the heads of government. The member country holding the G7 presidency is responsible for organizing and hosting the year’s summit.

On March 2, 2014, the remaining non-Russian G8 members, the European Union, and the European Commission suspended the planned G8 summit in the Russian city of Sochi and would instead meet as the Group of 7 in Brussels, blaming Russia’s role in the Crimean crisis.

Group of 7 ‘summit diplomacy’ has a number of functions. It provides a forum for world leaders to collaborate on collective problems, to manage the world economy, and to address issues arising from interdependence and globalization. It presents an opportunity for leaders to forge good personal relations. Group of 7 summits are also used to set international priorities, to identify and define issues, to set up new regimes and reinvigorate existing ones, and to provide guidance to international organizations. The G7 works closely with other organizations, in particular the International Monetary Fund (IMF) and the Organization for Economic Co-operation and Development (OECD).

Group of 7 summits have discussed macroeconomic issues such as international economic and financial management, trade, and relations with developing countries.

The G7 has no charter, formal rules, or permanent secretariat. The G7’s unusual format dates back to 1975: the Rambouillet meeting was intended to be a ‘one-time get-together’ to discuss economic and monetary issues in the wake of the OPEC oil crisis and the collapse of the Bretton Woods monetary system. This one-off meeting became an annual summit.

The European Union (EU) has never been recognised as a full member of the club. For this reason, the EU never held the G8 presidency, nor is the presence of the EU reflected in the name of the club – there are nine leaders around the G7 table: the heads of state and government of the Group of 7 countries, European council president Van Rompuy and European commission president Barroso.

The Group of 7 leaders could possibly meet again in Brussels, it is up to Germany, as holder of the 2015 G7 presidency, to lead the group next year.

Don’t Miss: Bali and Copenhagen Summits of UNFCCC (CoP 13 and 15)