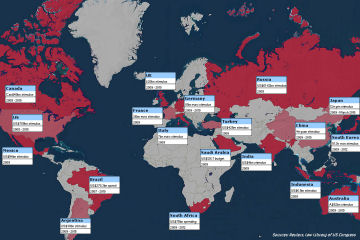 The G20, also known as the Group of 20 is a bloc of developing nations established on 20 August 2003. The G-20 was proposed by former Canadian Prime Minister Paul Martin as a forum for cooperation and consultation on matters pertaining to the international financial system. The group was formally inaugurated in September 1999, and held its first meeting in December 1999.

Many of the G-20 countries are considered “Rising Powers.”

With the G-20 growing in stature after the 2008 Washington summit, its leaders announced on 25 September 2009, that the group would replace the G8 as the main economic council of wealthy nations.

Since the November 2011 Cannes summit, all G-20 summits have been held annually. Russia currently holds the chair of the G-20, and hosted the eighth G-20 summit in September 2013. The next summit is in Australia in Brisbane in 2014, chaired by Tony Abbott, Prime Minister of Australia, and Turkey hosting it in 2015.

The theme of the G-20 meeting was “Building and Sustaining Prosperity”. The issues discussed included domestic reforms to achieve “sustained growth”, global energy and resource commodity markets, ‘reform’ of the World Bank and IMF, and the impact of demographic changes due to an aging population.

The G-20 Summit was created as a response both to the financial crisis of 2007–2010 and to a growing recognition that key emerging countries were not adequately included in the core of global economic discussion and governance. The G-20 Summits of heads of state or government were held in addition to the G-20 Meetings of Finance Ministers and Central Bank Governors, who continued to meet to prepare the leaders’ summit and implement their decisions.

The G20 does not have a permanent secretariat. Instead, the G20 President is responsible for bringing together the G20 agenda in consultation with other members and in response to developments in the global economy. To ensure continuity, the Presidency is supported in this by the “troika”, made up of the current, immediate past and future host countries.