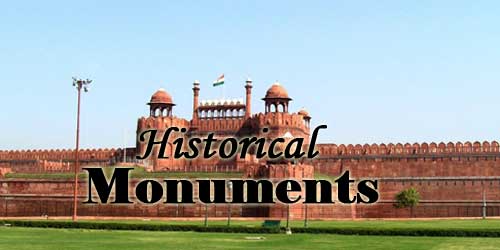 Qutab Minar, historical monument of India in red and buff sandstone, is the highest tower in India. It has a diameter of 14.32 meter at the base and about 2.75 meter on the top with a height of 72.5. It was built by Qutab-ud-din Aibak to celebrate Muslim dominance in Delhi after the defeat of Delhi’s last Hindu ruler. The construction of the tower was later taken over by his successors Iltutmish and Firoz Shah Tuglak. The different architectural styles from Aibak to Tuglak are clearly visible in the Qutab Minar.

Gateway of India, historical monument of India, the colossal structure was constructed in 1924 by George Wittet. The main objective behind the construction was to commemorate the visit of King George V and Queen Mary. It acts as a symbolic representation of Mumbai’s prosperity all over the globe.

Taj Mahal, historical monument of India the pinnacle of Mughal architecture, was built by the Mughal Emperor Shah Jahan, in memory of his wife Mumtaz Mahal. It took 22 years of the workforce of 22,000 persons to complete the tomb. It was designated as a UNESCO World Heritage Site in 1983 for being the “Jewel of Muslim art in India and one of the universally admired master pieces of world’s heritage”.

Must Read: History of India in a nutshell

Fatehpur Sikri, historical monument of India, it was built between 1569 and 1585 by the Mughal Emperor Akbar. It is considered as one of the architectural legacies of Emperor Akbar and consists of beautiful places, halls and mosques.

The Sun Temple, historical monument of India was built in about 1250 AD by the East Ganga king Narasimhadeva. The temple is shaped like a giant chariot and is known for the exquisite stone carvings that cover the entire structure. It was designed in form of gorgeously decorated chariot mounted on 24 wheels, each about 10 feet in diameter, and drawn by 7 mighty horses

Victoria Memorial, historical monument of India, it was built between 1906 and 1921 in the memory of Queen of Victoria by Lord Curzon. Built on the grounds on the Hoogly river it is now a museum having an assortment of British Raj Paintings and other paintings. It was built to highlight the glory of British Empire in India.

Jaisalmer Fort, historical monument of India, it was built in 1156 AD by the Rajput ruler Rawal Jaiswal to dispose his nephew Bhojdev from his territory. It is popularly known as “Sone ka Quila” by the local people.

The Great Stupa at Sanchi is the historical monument of India and was commissioned by the emperor Ashoka the Great in the 3rd century BCE and the 12th century AD. It is famous as a paradigm of Buddhist architecture and culture. Lord Buddha has been emblematically represented Sanchi Stupa in the figure of trees and other inanimate forms.

It was built by the Kakatiya dynasty around 12th and 16th century. The fort is built on a granite hill around 120 meters and is bordered by thick walls. The fort was renowned for diamond trade and it is said that the world famous “Kohinoor” was found here.

It was built by Adil Shah in the year 1656. It is a fine piece of Islamic architectural style. It has a floor area of 1700 sq. meter, a height of 51 meter and diameter of 37 meter. Any sound at this place echoes for over 11 times.