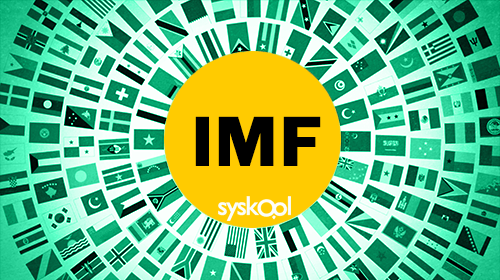 After Dominique Strauss-Kahn, Christine Lagard had been made as Managing Director of IMF on July 5, 2011. She is still serving as 11th MD of International Monetary Fund.

Objectives of International Monetary Fund
According to Article of Agreement of the IMF, its main objectives are as follows:

(5) To grant economic assistance to member countries for eliminating the adverse imbalance in balance payments.To minimize imbalance in quantum and duration of international trade

(6) To minimize imbalance in quantum and duration of international trade

International Monetary Fund is controlled and managed by a board of Governors. Each member country nominates a Governor. All the nominated Governors make a board of governors. Each country also nominates an alternate Governor who casts his vote in the absence of the Governor. Each Governor is allotted a number of votes which is determined by the quota allotted to the respective country in the capital of IMF. Each Governor has got the right of 250 votes on the basis of membership and one additional vote for each SDR 1,00,000 of quota. The additional of these two types of votes becomes the actual voting right of the member country. It clearly indicates that the voting right depends on the quantum of the quota of a particular country with IMF. This is the reason why the rich and industrialised countries got the higher voting rights due to their higher quotas. with theInternational Monetary Fund.

The main source of International Monetary Fund resources is the quota allotted to the member countries. Till 1971, all the amounts of quotas and the assistance provided were denominated in US dollar, but since December 1971, all the quotas and transactions are expressed in SDR (Special Drawing Right) which is also known as Paper Gold. In 1971, one SDR was assumed equivalent to 1 dollar but due to the subsequent decline in dollar value,  SDR 1 became equivalent to $1.585 by the end of April 1995. Since January 1, 1981, the value of SDR is being determined by the basket  of currency of 5 largest exporting member countries: US dollar, Deutsche Mark, Yen, Franc, and Pound Sterling.

In 1991, the weight to these 5 currencies in SDR price determination was as follows:

The currency value of SDR is determined by the IMF each day by summarising the value in US dollars, based on the market exchange rates of a basket of fine currencies.

The IMF’s financial year is from 1 May to 30 April. IMF lends to various member countries in the form of various facilities (Extended Fund Facility, Standby Facility, Contingent Credit Lines, Compensatory Facility etc.) designed to serve a specific purpose, but essentially aimed at a balance of payments stabilisation or meeting the emergent foreign exchange needs. The poor countries are also helped by funding from Poverty Reduction and Growth Facility. As on June 2004, the IMF was lending to 13 members in the from of standby facility, to two members under Extended Arrangements and 38 poor countries under poverty Reduction and Growth Facility.

The quota allotted by the IMF to each member has to be deposited partly in their own currency and remainder in the form of foreign exchange.

International Monetary Fund has played an important role in Indian economy. IMF has provided economic assistance from time to time to India and has also provided appropriate consultancy in the determination of various policies in the country. India is the founder member of IMF. The finance minster is ex-officio governor in IMF board of Governors. Till 1970, India was among the first five-nation highest quota with IMF and due to this status, India was allotted a permanent Place in executive Board of Directors.

India participates in FTP of the IMF from 2002. 43 countries, including India, now participate in FTP. By participation in FTP, India is allowing IMF to encash its rupee holding as a part of our quota contribution for hard currency which is then lent to other member countries who are debtors to the IMF.

Enhanced Structural Adjustment Facility (ESAF) was established in 1987 with an amount of SDR 6 billion to help the low-income countries with heavy debt burdens in the difficult external environment and implement comprehensive macro-economic and structural policy program aiming at strengthening their balance of payments position and fostering growth. India contributes as donations to Subsidy Account and made a commitment to provide grant contribution to the extent of US $ 1 million per year over 15 years for a total of US $ 15 million.