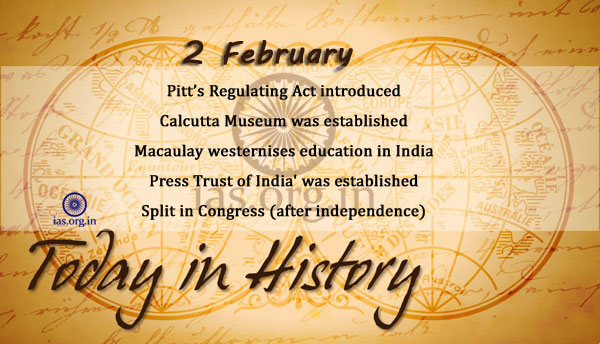 Pitt’s Regulatory Act was introduced to To modify the Indian Administration and put further controls on Government of British India after the 1784 Bill.

Earlier, in 1784, Pitt’s India Act was was enacted under the name East India Company Act 1784. This act came after the Regulating Act of 1773, it brought the company’s rule in India under government’s control by appointing the Board of Control and gave provision of joint government of British India by both Company and Crown but the apex authority remained in the hands of British Government.

Calcutta Museum was established. It was a part of the Asiatic Society at a suggestion of a Danish surgeon Dr. Nathaniel Wallich, who was its first Director also.

Thomas Babington Macaulay westernises education in India. English is made official government and court language and as medium of instruction.

Press Trust of India’ was established.

In 1987 for the first time Indira Gandhi was elected the president Congress Party. In 1958 again she did it but this time thereby Congress faced an spilt, because of her leftist inclination and congress was truing into more socialist. Under C. Rajagopalachari they formed Swantantra Party.

Mahakavi G. Shankar Kurup, Malayalam poet, the first receipent of “Gyanpeeth Puraskar (Award), and many other awards, passed away.

Mahatma Gandhi National Rural Employment Guarantee Act, 2005 earlier know as NREGA implemented. It was flagged off from Bandlapalli village of Anantpur in Andhra Pradesh on this day.