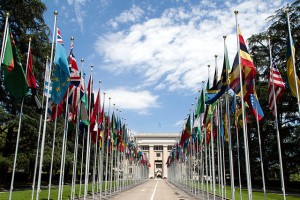 The history of international relations can be traced back to thousands of years ago; Barry Buzan and Richard Little. The interaction of ancient Sumerian city-states starting in 3,500 BC was the first fully-fledged international system.

The history of international relations based on sovereign states is often traced back to the Peace of Westphalia of 1648, a stepping stone in the development of the modern state system.

The concept of power in international relations can be described as the degree of resources, capabilities, and influence in international affairs. It is often divided up into the concepts of hard power and soft power, hard power relating primarily to coercive power, such as the use of force, and soft power commonly covering economics, diplomacy and cultural  influence.

Liberal international relations theory arose after World War I in response to the inability of states to control and limit war in their international relations. Early adherents include Woodrow Wilson and Norman Angell, who argued vigorously that states mutually gained from cooperation and that war was so destructive as to be essentially futile.

Liberalism was not recognized as a coherent theory as such until it was collectively and derisively termed idealism by E. H. Carr. A new version of “idealism” that focused on human rights as the basis of the legitimacy of international law was advanced by Hans Köchler.

Religion is visible as an organising principle particularly for Islamic states, whereas secularism sits at the other end of the spectrum, with the separation of state and religion being responsible for the liberal international relations theory.

The Organisation of Islamic Cooperation (OIC) is an international organization consisting of 57 member states. The organisation attempts to be the collective voice of the Muslim world  and attempts to safeguard the interests and ensure the progress and well-being of Muslims.