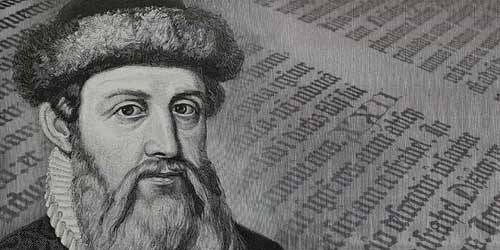 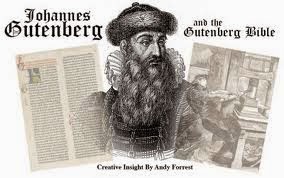 Johannes Gutenberg invented the printing press. While this may not sound like a big deal at first, the printing press is often considered as the most important invention in modern times. Think about how important information is today. Without books and computers, you wouldn’t be able to learn, to pass on information, or to share scientific discoveries. Prior to Johannes Gutenberg inventing the printing press, making a book was a laborious process. It wasn’t that hard to write a letter to one person by hand, but to create thousands of books for many people to read was nearly impossible. Without the printing press, we wouldn’t have had the Scientific Revolution or the Renaissance. Our world would be very different.
Must Read: People who changed the World

Johannes Gutenberg was born in Mainz, Germany around the year 1398. He was the son of a Goldsmith. Not a whole lot more is known about his childhood. It appears he moved a few times around Germany, but that’s about all is known for sure.

Johannes Gutenberg took some existing technologies and some of his own inventions to come up with the printing press in the year 1450. One key idea he came up with was a movable type. Rather than use wooden blocks to press ink onto paper, Gutenberg used movable metal pieces to quickly create pages. He made innovations all the way through the printing process enabling pages to be printed much more rapidly. His presses could print 1000’s of pages per day vs. 40-50 with the old method. This was a dramatic improvement and allowed books to be acquired by the middle class and spread knowledge and education like never before.

The invention of the printing press spread rapidly throughout Europe and soon thousands of books were being printed on printing presses.
Also Read: Fast facts about Inventions and Inventors

What books were first printed by the Johannes Gutenberg press?

It’s thought that the first printed item from the press was a German poem. Other prints included Latin Grammars and indulgences for the Catholic Church. Gutenberg’s real fame came from producing the Gutenberg Bible. It was the first time a Bible was mass produced and available for anyone outside of the church. Bibles were rare and could take up to a year for a priest to transcribe. Gutenberg printed around 200 of these in a relatively short time.