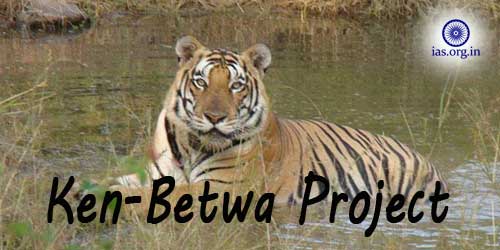 On Monday a team of wildlife experts presented a critical report, not yet public, on which depends the fate of the much talked about Ken-Betwa Project – the first-ever-interstate rive linking project since independence.

Although the report neither endorses nor disapproves of the Ken-Betwa project, it warns of the dangers to the ecology and animal life due to the proposed project. The experts have stated, in the report, that if the Government were to begin the work on the project, it must make sure beforehand that the proposed canal does not obstruct tiger movement and there should be enough habitat forest land developed to compensate for the loss of tiger reserve land.

Must Read: Supreme Court on the Uttrakhand’s Constitutional Crisis

The Ken-Betwa Project proposes the interlinking of Ken river in Madhya Pradesh to Betwa River in Uttar Pradesh, to irrigate the huge barren and hilly region of Bundelkhand

This interlinking of two rivers, though it has become a textbook case of development versus ecology as the Environment Ministry has raised many objections, is going to help in irrigating about 600,000 hectares of land and cater drinking water to 1.34 million people in both Madhya Pradesh and Uttar Pradesh.

In this context it is interesting to note here that this is not the first time that the project has faced opposition; a panel of the Environment Ministry in Nov, 2015 refused to clear the project until a landscape management plan is finalized and reviewed by independent experts.

The principal feature of the Ken-Betwa Project is a 230-km ling canal, linking the Ken and Betwa rivers, that is going to irrigate 3.5 lakh hectares; it is also going to submerge about 400 of the 4300 hectare Panna Tigers Reserve in Madhya Pradesh.

The Ken-Betwa Project proposes the construction of a dam across river Ken in Chhatarpur district in Madhya Pradesh to irrigate 6.35 Lakh hectares of land with the purpose of availing drinking water and the generation of 78 MW hydropower.

The Ken-Betwa project is going to cater facilities for 6,35,661 hectares of land in Panna, Chhatarpur, Tikamgarh districts in Madhya Pradesh, and Banda, Mahoba and Jhansi districts in Uttar Pradesh.

The reason behind the Ken-Betwa Project being the first of the ambitions series projects that aimed to transfer surplus water from certain rivers into deficient ones, is that is the shortest. The 87% of the river Ken, the last tributary of the Yamuna before it connects to Ganga, lies in Madhya Pradesh and 12 % in Uttar Pradesh.

Impact of the Ken-Betwa Project

The Ken- Betwa Project would cause ‘submergence of 58.03 sq. km (10.07%) of Critical Tiger Habitat (CTH) of the Panna Tiger Reserve and inflict 50% loss to existing unique habitat of highly endangered vulture species’ informed the inspector general of forest (wildlife) to the standing committee of the NBWL in its meeting held on February 26.

Because of the land fragmentation and loss of connectivity, in which it is going to destroy 10 villages, another 105.23 sq. km of CHT will be lost.

Mr. R. Sukumar, an expert member in the standing committee, has expressed his serious concern on the impact of the project that is going inflict huge submergence, habitat loss and affect adversely the Ghariyal Sanctury.

In the wake of this development the NBWL panel has taken a decision to set up a panel “comprising R Sukumar, HS Singh, a representative each from NTCA (National Tiger Conservation Authority), WIL (Wildlife Instituted of India), Madhya Pradesh Government, and user agency (water resource ministry) would conduct a site visit and submit the report in a month for further consideration.

The Union Government, in order to become sure of not facing any hurdle had earlier planned to start the project, that would take nine years to complete, but did not get green (Environmental) clearance.

This ambitious plan to connect country’s major rivers intended at transferring water from surplus areas to deficit areas first came into existence during the first National Democratic Alliance (NDA) Government in 2002. It is so that the present incumbent Government of NDA is vigorously promoting the Ken-Betwa Project.

NDA, in 2002, had identified 30 links comprising the Ganga and the Brahmaputra with an aim to address the problem of India’s water scarcity.

A former number of NBWL and an eminent environmentalist, Prena Singh Bindra, said, “the entire project is located within Panna Tiger Reserve, directly submerging 89 sq. km. Over 58 sq. km. is in the core critical tiger Reserve habitat, which is deemed to be inviolate as per law. The impact area will be far greater with construction, staff colonies, power houses, blasting etc, which will disturb and impact over 200 sq. km of the tiger reserve, and all the wildlife within if. This includes over a dozen tigers, including breeding tigress, nearly half of Panna’s population.