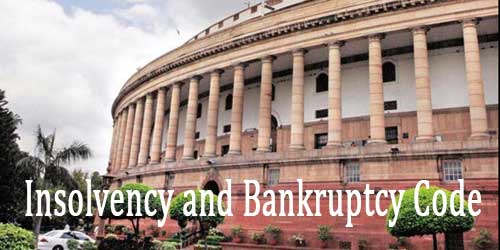 On Wednesday the Rajya Sabha passed the much debated and eagerly awaited Insolvency and Bankruptcy Code, 2016. The Bill or Code, considered as a vital reform that is going to make it much easier to do business in India, was passed by the Lok Sabha last week.

In both Houses of Parliament a majority of parliamentarians belonging to all political parties voted in support of this legislation after it became obvious that all the proposed amendments by a joint parliamentary committee were accepted by the Government.

With the passage of his new code India, once the President gives his assent and signs the legislation, is going to have a new bankruptcy law that is set to make sure time-bound settlement of insolvency, capacitate faster turn around of business and form a database of serial defaulters.

What is New Bankruptcy Code

The new Insolvency and Bankruptcy Code, 2016 is being considered as the most important economic legislation introduced and seen through by the Union Government.

The new code, that is set to replace existing bankruptcy laws, is going to cover individuals, companies, limited liability partnerships and partnership firms. It is going to become a comprehensive legislation (as it has been drafted by expertise, selected by the Union Government, within and outside Government) to deal with insolvencies of corporate sector. The code is able to help creditors in recovering their loans faster.

How the Code helps Indian’s Image

This Insolvency and Bankruptcy Code, 2016, Indi’s rank on the scale of resolving bankruptcy is 136 out of 189 countries. According to a report of the World Bank it takes, at present, more than four years to decide a bankruptcy case in India. There is a provision in the new Insolvency and Bankruptcy Code that is going to shorten this period to almost less than year, this move is certainly going to help India in boosting its image in International Business Circle for providing a swift remedy to investors class.

In order to provide proper and accurate help to sick companies the code has proposed the formation of new class of specialist professionals. Along with this the new Insolvency and Bankruptcy Code is set to create uniformation utilities that is going to collect all information about debtors to restrict serial defaulters from neesusing  the system. In order to regulate these utilities and professionals the new Codes has proposed the formation of the Insolvency and Bankruptcy Board of India to function as a regulator. This move also will help India upgrade its image.

Implementation: Key to success of the Code

As the new Insolvency and Bankruptcy Code presupposed the entity of institutional infrastructures such as information repositories like stock depositories; a new regulator without having the burden of failings of existing regulators; and a high-quality infrastructure of adjudication; unless these four pillars exist on the ground, the code is going to fail in the context of the huge pendency now being faced in the debt recovery tribunals.

The Minister of State for finance Mr. Jayant Sinha responding to the debate in Rajya Sabha informed that the Government would attempt to follow a stage-wise process to secure smooth implementation, and for it the Government would notify provision as and when the required infrastructure because ready.

However, a well known corporate, who has termed the insolvency and bankruptcy Code processes a vast change, said that its implementation would take time. It has been claimed by the corporate pundits that since India has no dearth of professionals who can swiftly assume the role of insolvency professionals, the insolvency and bankruptcy Code is certain to set the framework for bringing in transformations in the debt recovery tribunals.

The new Insolvency and Bankruptcy Code incorporates provisions to handle cross-border insolvency through bilateral agreements with other nations.

Right from filing a bankruptcy application to the time available for filing claims and appeals in the debt recovery tribunals, National Company Law Tribunals and Courts, the Code has introduced much shorter and aggressive time frames for every stage in insolvency process. According to the new Insolvency and Bankruptcy Code now applications for bankruptcy will have to be filed within three months; earlier this period was six months.

The Insolvency and Bankruptcy Code and Workers’ interests

With a clear objective of safeguarding the workers’ interests the Insolvency and Bankruptcy Code has inserted the provisions to make sure that the money to be paid to workers and employees from provident fund, the pension fund and gratuity fund should not be added in the estate of bankrupt firm or individual. And, in case of liquidation of assets of a company, it is the workers’ salaries of about 24 months that is going to get priority ahead of secured creditors.

The concerned ministry claimed that the new code protects the interest of workers who are undoubtedly the most vulnerable lot, the code enables workers in starting the insolvency process and they are going to be first in line to have the proceeds of liquidation.

The key to success of the new code will be the implementation as the it is augured on the formation of a complementary ecosystem incorporating insolvency professionals, information utilities and a bankruptcy regulator.