Kyoto Protocol is considered as a milestone in the field of climate change negotiations. It came into existence in third Conference of Parties held in Japan in 1997. The Kyoto Protocol has completed its term and now world is moving forward to a more strong resolution in Paris Meet last year. Before discussing Paris meet let’s have an analysis on few important meets of UNFCCC (CoP).

What is UNFCCC and CoP?

The first multilateral legal instrument on climate change was adopted, by consensus among 195 parties, in a UN Summit Conference on Environment and Development (UNCED). This instrument was named UNFCCC (The UN Framework Convention on Conference of the Parties). All institutions, particularly the Conference of the Parties (COP), the subsidiary bodies (advisor of the cop), and the COP bureau, engaged in the international climate charge negotiations are supported well by the UNFCCC secretariat. COP Bureau deals mainly with organizational and procedural issue emerging from the COP and also has some technical function. All the multilateral negotiation are based on the principle and objectives spelled art by the UNFCCC, which were to cooperatively consider what they could do to check average global temperature increase and the resulting climate charge.

On 11 December 1997, the Kyoto Protocol was adopted, in order to strengthen the global response to climate change in Kyoto, Japan. However, due to a complicated ratification process it entered into force on 16 February 2005.

In its first commitment period, KP fixed binding targets for 37 industrialized countries and the European countries. It was acknowledged by KP that developed countries were mainly responsible for the current high level of GHG emissions in the atmosphere owing to their 150 years of industrial activities. so it  only restricted the developed countries.

Under its central principle of common but differentiates responsibility. KP placed a heavier burden on developed counties. these targets on the whole added up to an average five per cent emissions reduction compared to 1990 levels over the five-year period from 2008 to 2012.

The Famework of Kyoto Protocol regime

The essential framework of the Kyoto Protocol has been constructed and shaped over almost two decoded of experience, political will and hard work. The most important features on which Kyoto Protocol was made up of:-

The restricted emission reduction commitments for developed parties, the first one, clearly indicated that space to pollute was limited. Carbon dioxide became new commodity as it was prevalent in greenhouse gas emissions. Kyoto Protocol then started to internalise what was then acknowledged as unpriced externalities.

The mechanisms of flexible markets, the second one, of the KP were based on the trade of emissions permits. The countries bound to targets had to meet them mainly through domestic action-for example, in the developing countries.

The objectives of Kyoto mechanisms:

Its objective is to promote, facilitate and enforce compliance with commitment listed in the protocol.

This mechanism permitted a country under the Kyoto Protocol (Annex. B Party- develop nation) to earn emission reduction units (ERUs) from an emission removal project in another Annex B Party, each being equivalent to one tonne of CO2 which could be counted towards meeting its Kyoto target.

In this mechanism the host party benefited from foreign investment and technology transfer. Although projects starting from the year 2000 might be eligible as JI projects, ERU issued from 2008.

The clean Development Mechanism (CDM), being the first global, environmental investment and credit scheme of its kind, allowed a party under the Kyoto Protocol (Annex B Party) to implement an emission reduction project in developing countries.

This scheme provided standardized emission offset instrument – CERs. The projects under this scheme could earn certified emission reduction (CER) credits, each equivalent to one tonne of Carbon dioxide that could be counted in meeting Kyoto targets.

The exchange of emission permits that – is carbon trading – may take place within the economy or may take the form of international transaction.

There are two types of carbon trading;

Emission permit is another name for carbon credit. The protocol had assigned a fixed amount of carbon emission for each Annex 1 country in the agreement. This amount was in fact the amount  of emission that was to be reduced by the concerned country, implying that the country was permitted to exit the remaining amount. This allowance was in fact kind of carbon credit.

The total amount of allowance was then subdivides into certain units which were expressed in terms of carbon equivalent. Each unit granted the owner the right to exit one metric tonne of greenhouse gods.

A country can earn another variant of carbon credit by investing some amount of money in carbon projects which exit lesser amount of greenhouse gas in the atmosphere. The Word Bank’s carbon finance unit estimated that the volume of carbon trade through emission trading route alone had indicated a 240 per cent increase in 2005 over the previous year.

It has the analogous benefits or encouraging green investment in developing countries and embracing the private sector in this effort to cut and hold steady GHG emission at save level. It also makes “leap- frogging” more economical by creating the possibility to terminate older, dirtier technology for newer, cleaner infrastructure and systems to get long term benefits.

The Kyoto Protocol compliance mechanism was aimed to strengthen its environmental integrity, support the credibility of carbon market and ensure transparency of accounting by parties.

Non-Compliance of Kyoto Protocol and Penalties 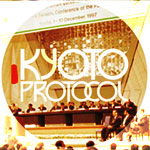 -The country that does not fulfil the requirements for measurements and reporting loses the privilege of getting credit through joint implementation projects.

– The country that crosses its emission cap, and does not try to bridge the difference by using any of the available mechanisms, must make up the difference plus and an additional thirty per cent during the next period. The country could also face a ban from participating in the “cap and trade” programme.