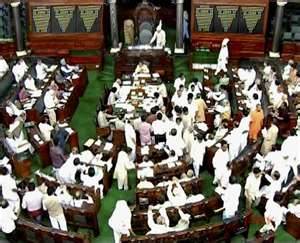 The Constitution of India was adopted on 26 November 1949 and came into effect on 26 January 1950, proclaiming India to be a sovereign, democratic republic. It contained the founding principles of the law of the land which would govern India after its independence from British rule.

The maximum strength of the House envisaged by the Constitution is 552, which is made up by election of up to 530 members to represent the States, up to 20 members to represent the Union Territories and not more than two members of the Anglo-Indian Community to be nominated by the Hon’ble President, if, in his/her opinion, that community is not adequately represented in the House. The number is divided among the 28 States and the 7 Union Territories.

The qualifying age for membership of Lok Sabha is 25 years.  The Lok Sabha at present consists of 545 members including the Speaker and two nominated members.

Lok Sabha elects one of its own members as its Presiding Officer and he is called the Speaker. He is assisted by the Deputy Speaker who is also elected by Lok Sabha. The conduct of business in Lok Sabha is the responsibility of the Speaker.

Three sessions of Lok Sabha take place in a year:

When in session, Lok Sabha holds its sittings usually from 11 A.M. to 1 P.M. and from 2 P.M. to 6 P.M. The first hour of every sitting of Lok Sabha is called the Question hour. Asking of questions in Parliament is the free and unfettered right of members. Questions are of three types – Starred, Unstarred and Short Notice.

After the Question Hour, the House takes up miscellaneous items of work before proceeding to the main business of the day. These consist of one or more of the following:-

Adjournment Motions, Questions involving breaches of Privileges, Papers to be laid on the Table, Communication of any messages from Rajya Sabha, Intimations regarding President’s assent to Bills, Calling Attention Notices, Matters under Rule 377, Presentation of Reports of Parliamentary Committee, Presentation of Petitions, – miscellaneous statements by Ministers, Motions regarding elections to Committees, Bills to be withdrawn or introduced.