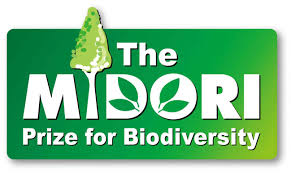 The MIDORI Prize for Biodiversity was established in 2010 at the occasion of the twentieth anniversary of the AEON Environmental Foundation, which coincided with the celebration of the International Year of Biodiversity.

The MIDORI Prize honours three individuals who have made outstanding contributions to conservation and sustainable use at local and global levels, and who have developmentally influenced various biodiversity-related efforts, as well as raising awareness about biodiversity. The aims of this Prize are to extend the developmental influence of the individual’s efforts to various projects relating to biodiversity throughout the world.

Each winner receives a certificate, a commemorative gift and a monetary prize of 100,000 US dollars. The MIDORI Prize is co-hosted by the Secretariat of the Convention on Biological Diversity and will be a key instrument at the service of the objectives of the United Nations Decade on Biodiversity 2011-2020.

Dr Kamal Bawa, an Indian Scientist, on 8 September 2014 won the MIDORI Prize in Biodiversity 2014. Bawa was honoured for his research that included climate change in the Himalayas.

The name of the winners along with Kamal Bawa was announced in Tokyo, Japan and Montreal, Canada by the AEON Environmental Foundation and Convention on Biological Diversity (CBD) Secretariat.

Other Awardees of 2014 Midori Prize in Biodiversity

The award ceremony will be held on 15 October 2014 in Pyeongchang, South Korea in conjunction with the high-level segment of the 12th meeting of the Conference of the Parties to the Convention on Biological Diversity (COP 12).

The MIDORI Prize for Biodiversity 2012 was awarded on 17 October 2012 in Hyderabad, India, at a ministerial luncheon hosted by the Government of India during the eleventh meeting of the Conference of the Parties to the Convention on Biological Diversity (COP11).

The establishment in 2010 of “The MIDORI Prize for Biodiversity” corresponded to the 20th anniversary of the AEON Environmental Foundation and commemorated the International Year on Biodiversity 2010 as well as the hosting by Nagoya, Aichi Prefecture and Japan of the tenth meeting of the Conference of the Parties to the Convention on Biological Diversity.

Must Read: Abel Prize 2016 Goes to Wiles for Solving FLT

In 2010, the first MIDORI Prizes were awarded to:

The Nobel Prize Everything you wanted to know