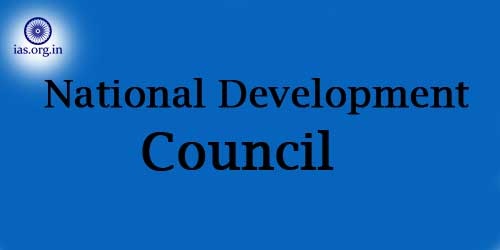 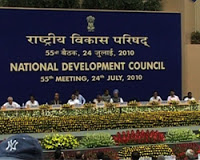 National Development Council (NDC) is a non-statutory body which was constituted to build co-operation between States and Planning Commission for economic planning. The National Development Council was constituted on August 6, 1952, by a proposal of the Government. The Prime Minister is the Chairman and Secretary of the Planning Commission remains its secretary. In the beginning, only the Chief Ministers of the States were its members, but after 1967, all the Ministers of Central Cabinet, Administrators of the state ruled by the Center and all the members of Planning Commission were Included as members of this body.

The National Development Council is an important organisation, whose main functions are as follows:

1. To evaluate the implementation of National Planning from time to time.

2. To examine the social and economic policies that influence the economic development.

3. To give suggestions in the order to achieve maximum co-operation of the people, improve administrative                        efficiency, suggest necessary measures for the developments of under-developed and backward classed and also to      mobilise resources for national development.

4. To study the plan preparation by the Planning Commission and after mutual discussions give it the final shape. It        is only after its ratification that the format of the plan is published.