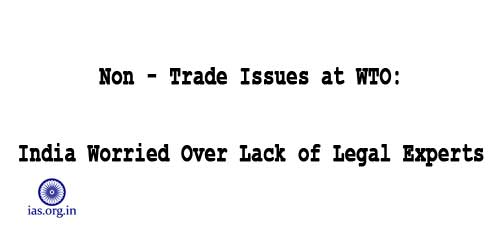 These Developing nations are challenged not only by the lack or an adequate pool or trade law experts to represent them effectively at the DSB but also by particular efforts to bring within the body’s range non – trade issues such as labour and environment.

India has been regularly advocating that certain issues, comprising or labour and environment, must be kept out of the WTO’s radar and instead be dealt with by the global bodies such as the International Labour Organisation and United Nations Framework Convention on Climate Change. The developed world, however, is adamant that the WTO addresses, what they say, global trades new challenges, including labour and environment.

As an intergovernmental organisation, the World Trade Organisation regulates international trade. Signed by 123 Nations on 15 April, 1994, under the Marrakesh Agreement, the WTO commenced on 1 January 1995. WTO replaced General Agreement on Tariffs and Trade (GATT) that commenced in 1948.

The WTO handles regulation of trade between participating countries by providing a framework for negotiating trade agreements and a dispute resolution process intended at enforcing participants’ attatchment to World Trade Organisation agreements which are signed by representatives of member Governments and ratified by their Parliaments.