My account
Get into your account.
LoginRegister
Plans
Home Know Defence Param Vir Chakra (PVC) – All You Need to Know 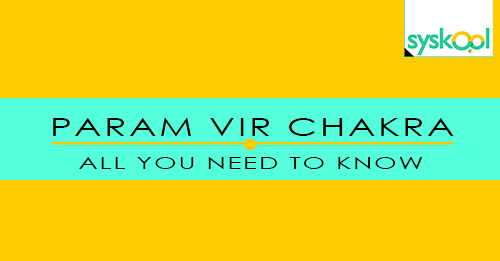 Param Vir Chakra (PVC) as is commonly known to defense personnel is India’s highest military decoration. It is what every army personnel dreams for. It has mostly been awarded posthumously.

The PVC was established on first Republic Day of India, 26th January 1950. Only people enlisted in the Indian military are eligible for it. It is given to the highest and the bravest of the brave act of valor and self-sacrifice in the presence of the enemy. It was designed by Savitri Khanolkar, wife of Vikram Khanolkar, an officer in the Indian Army. She was requested by Hira Lal Atal, the first Indian Adjutant General, Major General.

It is a circular bronze medal 3.49cm in diameter. The state emblem of the four lions is in the center on a raised circle. Lord Indras’s all mighty weapon the Vajra surrounds it on four sides. On the back side are two legends separated by lotus flowers. The words Param Vir Chakra are inscribed in English and Hindi. The whole disc is suspended from a suspension bar, with a purple ribbon going through it. The ribbon is 1.3 inches long.

Awarded To Only 21 People and None from the Navy

Till date, only 21 soldiers have been awarded this honor. Out of which 20 were from the Indian Army and one from the Air force and none from the Navy. Only 5 of the awardees are living, Lt. Col. Dhan Singh Thapa, Subedar Bana Singh, Rifleman Sanjay Kumar, Subedar Major & Honorary Captain Bana Singh and Naib Subedar Yogendra Singh Yadav. The medal is a symbolic representation of the Vajra made by Rishi Dadhici for the Gods with his bones. It is equivalent to

All the officers eligible for this award are either non-commissioned soldiers or commissioned up to the rank of Lieutenant- Colonel.

Postage Stamps and On TV

A stamp depicting the PVC medal was issued by Indian Postal department in 1976. In 2000, 4 more were released depicting various recipients. The brave soldiers on the stamps were:

In 1988 a serial was made for Indian Television depicting various stories of the winners of PVC.

Most Prominent Officers Who Received PVC

Major Somnath Sharma, from the state of Himachal Pradesh, was the first soldier to be awarded this prestigious award. He laid down his life fighting for the nation against Pakistani troops in Kashmir. He was awarded this posthumously.

Captain Vikram Batra of HP, was the last officer to been awarded this honor in 1999 for his extremely important role in the Kargil war, in capturing an enemy post. His father G.L. Batra received this award on his son’s behalf, from the President of India.

Some Basic Facts About India