Name the physiographic units of India and briefly explain their formation.

I.Introduction: The Indian subcontinent is characterized by the diversified physical features. They exhibit striking contrasts in structure, altitude, climate etc.
II. Physiographic divisions: Physical features of India may be divided into four physiographic units.
They are
1. The Himalayas and their associated mountain range.
2. The Indo-Gangetic plains
3. The peninsular plateau.
4. The coastal plains.
Read also: Geophysical Phenomena
1. Formation of the Himalayas:
a. According to the Geologists, during Mesozoic times, the entire Himalayan area was occupied by a great Geosyncline called “Tethys sea”.
b. Angaraland was the land mass to the North of Tethys Sea. Gondwana land which contained the present peninsula was to the south of the Tethys Sea.
c. In the course of time, these two land masses split up and began to move apart.
d. Then the weaker Tethys Sea got compressed and buckled up.
e. After some million years due to immense compressional forces, the sediments deposited in the Tethys Sea were folded to acquire the present form of Himalayan Mountains.
2. Formation of Indo Gangetic plains:
a. In the wake of the Himalayan uplift, a ‘fore deep’ was formed in the intervening space between the peninsular plateau and the Himalayan Mountains.
b. Then an immense amount of Alluvium was deposited in this depression by the Himalayan Rivers. Thus, it became the largest alluvial plain in the world.
3. Formation of peninsular Plateau:
a. According to Geologists, it was a part of The Gondwana land.
b. It was a block of old crystal rocks lifted above the sea level in the pre-Cambrian times, and never submerged again.
4. Formation of coastal plains: Were formed by the peninsular rivers.
Must Read: Water Resources in India 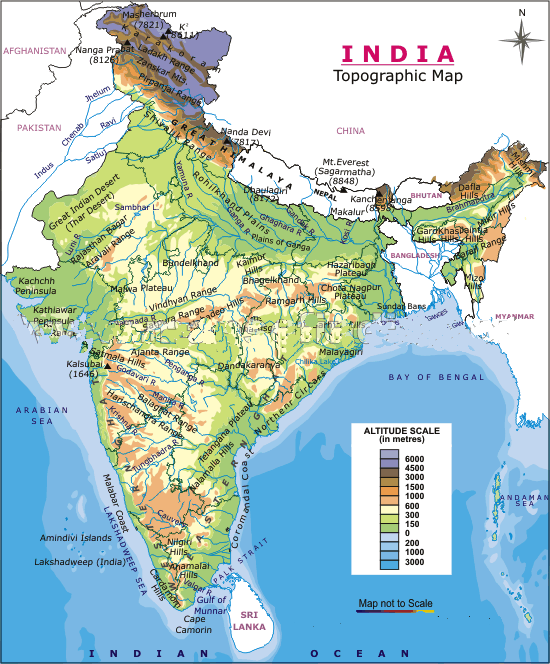 What are the parallel ranges of the Himalayas? Explain.

I. Introduction: The Himalayas form India’s northern frontier from Jammu and Kashmir to Arunachal Pradesh with a distance of 2400 km and a width of 500 km.
II. Kinds of parallel ranges of Himalayas: The Himalayas comprise three parallel ranges with deep valleys and extensive plateaus. They are:
1. The Himadri (The greater the Himalayas)
2. The Himachal or lesser the Himalayas
3. The Siwaliks or outer the Himalayas
The Himadri or Greater Himalayas:
a. This is the highest loftiest and most continuous range with an average elevation of about 6100 mts.
b. It has the world’s highest and prominent peaks such as Mt. Everest, Kanchenjunga etc.
c. It is formidable and snow bound through out the year and found with a number of glaciers.
d. It is mainly composed of crystalline and metamorphic rocks.
The Himachal range:
a. This is a most intricate and rugged mountain system.
b. It is to the south of the Himadri range with an altitude of 1000- 4500 mts.
c. Its width varies between 50 and 80 kms.
d. The most important and longest range in the Himachal is the Pir Pan Jal range of Kashmir.
e. Kashmir valley lies between Himadri and Pirpanjal range.
f. It has beautiful Kulu and Kangra valleys.
g. Many hill stations like Simla, Mussoorie, Nainital etc are situated in this range.
Must Read: World’s 10 Greatest Ocean or Seas, Deserts, and Mountains
The Siwalikhs:
a. It is the southern most range of the Himalayas.
b. It extends from Jammu and Kashmir to Arunachal Pradesh.
c. The Siwaliks in Jammu region are called Jammu hills and in Arunachal Pradesh as Mishi hills.
d. The width of this range varies between 50 km in Himachal Pradesh and 15 km in Arunachal Pradesh.
e. Its average height ranges from 600 to 1500 mts.
f. These are backed by The ‘Duns’ and are covered with thick tropical deciduous forests.

Describe the importance of Himalayas.

A. I. Introduction: The Himalayas form India’s northern frontier from Jammu and Kashmir to Arunachal Pradesh covering a distance of about 2400 km and with a width of 200 to 500 km.
II. Importance of the Himalayas:
Barriers: The Himalayas act like barriers protecting the great plains of India from the cold winds of central Asia during winter. They also acted as impenetrable borders protecting the country from foreign invasions
Cause rains: The Himalayas are responsible for causing rainfall in the plains during summer and ultimately to have a monsoon type of climate in the country.
The Perennial flow of water: Rivers originate in the glaciers of these mountains and cause the perennial flow of water. These lives contributed to the economic development of the Great Plains.
Scenic beauty: The Himalayas are known for beautiful valleys like Kashmir Kulu, Kangra etc and hill stations. These valleys and hill stations attract tourist from all over the world and earn foreign exchange for the country.
Horticulture: Himalayan valleys are known for the cultivation of fruits like Apples.
Vegetation: Alphine vegetation is an important contribution to the forest economy.
The gaps in the mountain ranges of the Himalayas called passes- like Khyber, Bolan, permitted a great exchange of culture and commerce with neighbouring countries.
III. Conclusion: Thus, there are many advantages of the Himalayas to India.

What is a pass? Give examples.

What is ‘DUN’? Give examples from the Himalayan region.

1. The Siwalik Mountains are backed by a discontinued series of narrow longitudinal flat-bottomed strike valleys. These valleys are called as ‘Duns’
2. Dehra Dun and Patli Dun in Uttaranchal and Kotli Dun in Jammu are the examples of prominent “Dun Valleys”.
Don’t Miss: Agasthyamala Biosphere Reserve (ABR) Listed by UNESCO

Name the important peaks of Himalayas.

What is plain? Describe the surface differences recognized with the geomorphology of Great Plains.

I. Introduction: The land surface is not the same everywhere. There are various land forms i.e. mountains, Plateaus, and plains.
II. Meaning of plain: The material eroded and transported by rivers is deposited at suitable places and thus, plains are formed. A fertile land with the level surface, gentle, slope and with heights far less than a plateau is called a plain.
III. Surface differences of Great plains: There are four important surface differences recognized with the Geomorphology of great plains. They are Babar, Terai, Bhanger, Khadar Babar: The Himalayan rives deposit gravel and unassorted sediments along the foot of the Siwaliks. This pebble-studded zone of porous beds is known as Babar. It forms a narrow belt, only 8 to 16 km width in the northern boundary of Punjab, Haryana, and Uttar Pradesh.
Terai : Many small Himalayan rivers flow underground through Bhabar zone and reemerge on the surface creating 15-30 kms wide marshy tract called ‘Terai’
Bhangar : the older alluvium of the floodplain is called Bhangar’.
Khadar : The never alluvium of the floodplain is called ‘Khadar’. This zone is found with excessive dampness with a thick growth of forest and a variety of wildlife.

Compare and contrast the geomorphologic features between Malwa plateau and Deccan Plateau.

A. Introduction: The peninsular plateau is one of the physiographic units of India. It is broadly divided into Malwa Plateau and Deccan Plateau.

Distinguish the differences in physiography of Western ghats and Eastern ghats.

Compare the coastal plains of east and west.

The Himalayas are the young folded mountains.
The Himalayas were once occupied by the sea Tethys.
The Himalayas form India’s northern frontier from Jammu and Kashmir to Arunachal Pradesh.
The longitudinal extent of Himalayas is 5 lakh sq.km.
Greater Himalayas are also known as The Himadri.
K2 mountain peak is in Trans-Himalayan zone.
The highest mountain peak of The Himalayas in India is Kanchanjunga.
Pamir plateau is located in Trans-Himalayan zone.
The longitudinal extent of The great plains in India is 7 lakhs sq.km
The younger Alluvium is known as Khader.
Terai is a wide marshy track.
Bundelkhand upland is an extension of Malwa plateau.
Peninsular plateau is slightly tilting towards The east.
The highest peak in peninsular plateau is Annaimudi.
The Deccan plateau is bounded on north by sathpura range.
Narmada river flows through a rift valley.
Alakananda and Bhagirathi head streams formed the main stream of ganga.
The world’s highest and prominent peaks are found in Himadri range.
The most important Himachal range is Himachal.
South-west world extension of pirpanjal is called Dhaula Dhar range.
The world’s second highest peak is K2.
The longest glacier is Siachin.
The world’s highest table land is Pamir plateau.
Luni basin is found in Rajasthan plain.
Guru sikhar peak is situated in the Aravalli hills.
The important summer resort in M.P is pachmarhi.
The highest peak of the Nigiris is Doda betta.
The Ganga enters Bangladesh and then it is called Padma
The largest peninsular rivers Godavari.
Godavari joins Bay of Bengal near Rajamundary in A.P