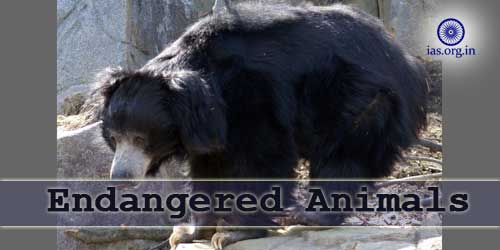 Apart from having an astonishing diversity of animal life from Ladakh in the Himalayas to Kanyakumari at the southern tip, India is also home to endangered animals belonging to the species such as lion tailed macaque, Bengal tiger, Asiatic elephant, lion, deer, Siberian crane, wild buffalo, wild ass, porcupine, the one horned rhinoceros and snow leopard. It is important to mention here that almost sixty percent of the total population of the wild tigers in the world resides in India.

That tigers in India belong to the group of endangered animals is quite evident from the fact that in 1939 there were about 30,000 tigers in India but nowadays there are only around 3000 left.

The tiger, the largest of the big cats, is a magnificent animal. They are found usually throughout India barring some desert regions. Tiger can be spotted even up to the height of 3,050 metres in Himalaya.

In today’s India the tiger, the national animal of India, is highly endangered. The major factor behind tigers falling into the group of endangered animals is the loss of forest habitat. The hunting areas of these majestic animals have been and are being turned into farms and village. Apart from this, because of large scale poaching also in many Asian countries for their valuable skins, tigers’ numbers have been reduced. Chinese used the body parts of tigers in medicine and exotic recipes. After being declared man-eaters or cattle-lifters tigers are killed leading to the decline in their population.

Highly endangered lion tailed macaque, belonging to the group of endangered animals, live in Silent Valley in Kerala, where the construction of a hydro electric project was proposed which could have spelt disaster for these rare and already endangered animals; however, luck prevailed and after a strong protests from conservationists, the proposal was canceled, and the lion tailed macaque’s hope for survival got a chance.

Among the list of endangered animals of India are its big, wild cats which include Asiatic lion, the Bengal tiger, the snow leopard, panther or leopard, the clouded leopard and many more. Among these, tigers can be spotted in many parts of India while the Asiatic lion is found only in the Gir forest. And it is only in the dense evergreen forests of Sikkim and North East Asia, one of the highly endangered animals, the clouded leopard, can be found, while in the Himalayan ranges at altitudes between 3,000 and 4,000 metres the snow leopard is found.

The loss of habitat has been cited as the reason behind the decline of the cat species in India, and along with this pressure of increasing human population on wildlife reserves is also a reason. In India, some species of dogs are also listed in the group endangered animals; for instance, the India Walf, a cousin of dog was once scattered all over India; however, its numbers declined rapidly because it is pitilessly and relentlessly hunted because of a wrong perception of the people that it carries away children.

The another cousin of the dog, the Indian fox, that also constitutes the group of endangered animals, is fast becoming scarce because it is hunted for its skin and flesh which fetch big money in the international market. The Indian wild dog has also been enlisted in the group of endangered animals because of the loss of habitat, diseases that it picks up from feral and domestic dogs and competitions from predators.

The sloth bear and the Himalayan brown bears fall into the group of endangered animals of India. The Himalayan bear, usually found in Central and North Eastern areas of the Himalayas, are commonly considered to be the most likely animal behind the legends of Yeti. They eat fruits, wild berries, insects and rats; and hibernate in caves or dens and are difficult to find because they are very rare and live in such areas that prove difficult to reach.

The sloth bear, with its characteristics ‘V’ shaped mark on its chest, has long shaggy black hair; it is found in the forests of Sri Lanka and India. Although it is enormous in size, it primarily eats termites. It almost never attacks and eats another animal because its usual diet includes insects, although it may eat flesh of a dead carcass if it happens to encounter one.

These bears are also rapidly vanishing and becoming rare because people in order to catch the younger ones kill the adult bears; they do so with the intention to import training to the younger ones. In some parts of India were, and still are, made to dance to entertain the people; and not only this they are sold in the market because some medicines and food are made from these beautiful and innocent creatures.

One of the most important reasons behind the reducing numbers of sloth bears is that people are engaged in cutting down trees in the forest with an intention to prepare lands for farming due to which these creatures of nature have become homeless, helpless. They are even killed for eating crops which they do to survive.

In the rain drenched regions of North East India the Indian rhinoceros is found. It is very unfortunate for these animals, who constitute the group of endangered animals of India, that their homeland is so fertile that it is beign transformed into farm land to grow rice and other crops.

Because of this development, rhinoceros did not have any choice but to eat the crops for its survival which mad the farmers very angry and in retaliation rhinos were slaughtered in large numbers.

Apart from these unfortunate happenings with rhinos, they are hunted and killed mercilessly by humans, greedy humans, who have come to know that the horns of rhinos are greatly prized for medicinal purposes. They are also hunted and killed for sport.

The Indian egg eating snakes, India rock python and the reticulated pythorn are the Indian snakes who constitute the group of endangered animal of Indian.

The rock python can be found in scrub jungles, mangroves and dense forests while the reticulated python, the largest of the snakes, is found in North Eastern India and the Nicobar Islands. The India egg eating snake is a rare species that survives by feeding on the ages of birds and reptiles. These snakes have made its their entry into the list of endangered animals because they are killed primarily for their beautiful skin and partly because of reduction in their habitat.

Don’t Miss: Biodiversity and Its Conservation