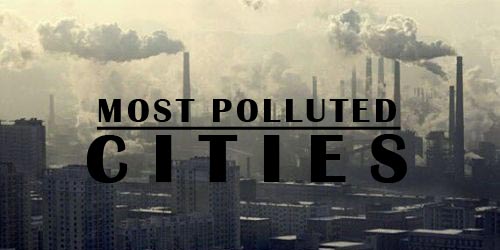 Delhi is the second most polluted city in the world and the most polluted city in India. WHO has said that the situation in Delhi is so worst that its air has particulate matter of 2.5 concentrations of 153 micrograms. Traffic and congestion are supposed to be the biggest contributors of pollution here.

After Delhi, Patna is the most polluted city in India. The capital of Bihar has several mills and factories that manufacture agricultural goods. These factories are believed to be the main reason for the pollution. In this region, the level of harmful particles is 2.5 micrometers (PM2.5).

The main industries in this city include tourism, dairy, chemical, manufacturing, and textile and this is why pollution in the city is on the rise. It is a historical place so special efforts should be made to take pollution under control as it affects historical places and tourists. According to Central Pollution Board, the particulate matter is at 329 micrograms per cube meter.

Must Read: Top 10 Largest Economies of the World

It is one of the most polluted cities in India. The main reason for pollution in this area is that it has many power plants. It is very rich in coal and production of electricity. SPM in air is 250 micrograms per cubic meter while the concentration of dust particles in 350 parts per million. The respirable particles are 230 PPM.

It is the fifth largest city in India and also the third fastest growing city in the world. The main reason for pollution in Ahmedabad is it has textile industries. The study of measuring pollution is that annual mean concentration of the particulate matter of less than 10 microns and less than 2.5 microns.

It is considered as one of the most polluted cities in India. It is also known as city of bangle. This city has many glass industries and so it may be the reason of pollution. The level of harmful particles in the air is less than particulate matter 10.

It is one of the largest cities of India and ranks seventh in the list of most polluted cities in India. The Golden Temple sees thousands of pilgrims and tourists on a daily basis. The resulting traffic and congestion in the city adds to the pollution. The study of pollution conducted by IIT Delhi found the particulate matter concentration 10.

It is famous for leather industry that is successful in meeting national and international demand for leather of best quality. The leather industry creates a huge and hazardous pollution. About 30 crore litres of dirty and polluted water is dumped in the Ganges. It is also generating 400 tonnes of solid waste and there is a rampant pollution in ground water source.

It is a famous tourist destination in India. It has a famous and beautiful place called Taj Mahal. But due to the enhancement in pollution, dry sand, and acid rain, its marble and other parts of have damaged. Hence, it is considered as one of the most polluted cities in India.

It is an industrial city and widely known as the hub of many industries. Due to increase in number of industries and the never-ending traffic in this Punjabi city are the major reasons for the pollution.