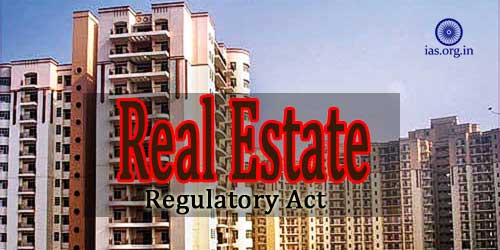 It was at the National Conference of Housing Ministers of States and Union Territories in January 2009, during the reign of UPA-II, that a proposal for a law for real estate was first debated and discussed. And after eight-long years of efforts, the eagerly and much awaited Real Estate Regulatory Act, 2016 came into force on May, 1 as announced by the Ministry of Housing Urban Poverty Alleviation (HUPA).

The Law has an intention to shield buyers from real estate developers who often fail in fulfilling their promise-professional one –of delivering on time and, therefore, regulate India’s lurid real estate sector.

Real Estate Regulatory Act assures the timely completion and delivery of flats to consumers by making sure that stringent regulations be imposed on developers to secure timely construction that is the most essential factor for the timely delivery. The law seems to provide relief to consumers in earnest because it has made consumers entitled to a full refund with interest, in case of a long delay, of course undue, in the delivery of a flat.

It has been made mandatory by the Real Estate Regulatory Act for the developers to share their final projects plans as an essential and inevitable part of their disclosure terms, without having any room for going back. At being found guilty the Law, as a form of punishment, imposes a 10 percent project cost penalty and upto 3 years of jail.

Under this new Law, Real Estate Regulatory Act, the developers have to deposit 70 percent of the collections (in terms of Money) from buyers in separate accounts for the cost of construction that comprises the cost of land too.

According to the law the developers have to secure all the clearances before the launch of a project. For the structural defects the liability of the developers have been enhanced from 2 to 5 years with a stern clause that the developers cannot change plans without the prior consent, in writing, of two thirds of alotees.

The implementation of the Real Estate Regulatory Act is going to lead to the forming of necessary operational rules and establishment of institutional infrastructure for shielding the interests of consumers and encouraging the development of real estate sector in an environment of trust, confidence, credible transactions and time-bound and efficient execution of projects.

According to the notification of HUPA, that announced the commencement of the Act (Real Estate Regulatory Act) on May 1, the Central and the State Governments have to formulate rules within six months (that is October 31, 2016) as per the section 84 of the Act. It has been made very clear that the rule for the Union Territories without legislatures be formulated by HUPA and for Delhi it will be accomplished by Urban Development Ministry.

The section 84 of Real Estate Regulatory Act provides that “the appropriate Government shall, within a period of six months of the commencement of this Act, by notification, make rules for carrying out the provisions of this Act”.

The Government has to appoint a Real Estate Authority: the section 20 of the Act stipulates that “the appropriate Government shall, within a period of one year from the date of coming into force of this Act, by notification establish an authority to be known as the Real Estate Regulatory Authority to exercise the powers conferred on it and to perform the functions assigned to it under this Act”. These Authorities have to decide on complaints/disputes of buyers and developers within 60 days. These Authorities, after their establishment, have to, within three months, formulate regulations that are linked to their day-to-day functioning (Section 85 of Real Estate Regulatory Act).