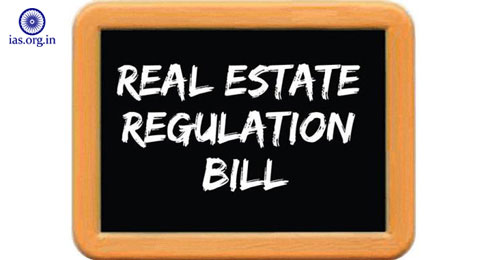 Real Estate Regulatory Bill 2016 (Regulation and Development), was passed in the Upper House, the Rajya Sabha, on 10 March, Lok Sabha passed it on 15 March. The Bill that solicits to protect home buyers as well as incourage investments in the real estate industry has been passed with 20 major amendments that have been approved by the Union Cabinet.

These amendments are based on the suggestions of a Rajya Sabha committee that was endorsed to examine Real Estate Regulatory Bill that was pending in the Rajya Sabha.

Must Read: Aadhaar Bill: Passage and its Characteristics

The Real Estate Regulatory Bill caters for mandatory registration of all projects with the Real Estate Regulation Authority in each state. Now projects on at least 500 sq metres of area or with eight flats are to registered with the recommended regulatory authority; earlier the area was 1000 sq metres. This amendment has brought a larger number of projects under the regulator’s range. Through, this amendment the Government has also tried to make it clear that the Bill aims at establishing regulatory body for transparent business.

Real estate agents who contemplate to sell any apartment, building or plot have to register themselves with the regulatory authority. Now builders have to deposit 70% of the sale proceeds, that comprises of land cost, in a security account to meet construction cost; earlier proposal for the same was 50% or less. And now they have to pay interest to home buyers for any defalcation or delays at the same rate they charge the buyers. Builders are going to be accountable for structural defects for five years; earlier proposal concerning the time frame was of two years.

Under the new proposal carpet area has been clearly defined as usable places like kitchen and toilets have been included in the definition. Garage has been kept out of the compass of the definition of apartment. Formation of residents association within three months of the allotment of a majority of units in a project has been made compulsory.

Although the Real Estate Regulatory Bill has authorized the regulatory authorities to hear and act the consumers’ complaints, it also permits the aggrieved consumers to approach consumer courts at the district level. The regulatory bodies will mostly be located in the state capitals.

The Government, earlier in December 2014, had brought commercial real estate projects under the compass of the Bill, made the conditions of the Bill applicable to all projects in which sales were still in progress and put in place a system that would consent of two thirds of buyers for changing project plans.

The amended and revisedReal Estate Regulatory Bill comprises an empowering provision for arranging insurance of land title, that is at present not available. This provision is going to benefit buyers and sellers in situations where the title of the land becomes invalid.