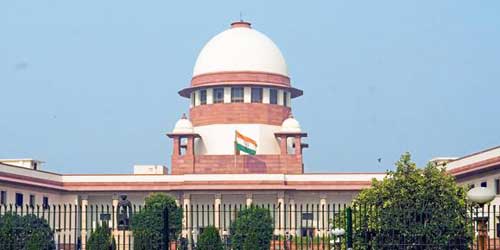 According to the Supreme Court, as a person’s right to freedom of speech must be balanced with the other person’s right to reputation, sections 499 and500 of the IPC (Indian Penal Code) make ‘defamation’ a criminal offence and that is quite necessary.

Rejecting the contention that defamation could become a criminal defamation offence only if it fomented to make an offence, the apex court said that defamation had its own independent identity through which the State maintains a balance between fundamental rights.

Pointing out the difference between Sections 499 and 500 and Section 66 A (prosecution for obscene social post) of the Information Technology Act, the Supreme Court said that the Section 66 A of IT Act had been struck down it on the ground of procedural unreasonableness and vagueness.

Must Read: Supreme Court’s Ruling on Drought in India

Section 499 of the Indian Constitution while defining defamation says “whoever, by word either spoken or intended to be read, or by signs or by visible representations, makes or publishes any imputation concerning any person intending to harm, or knowing or having reason to believe that such imputation will harm, the reputation of such person, is said except in the cases herein after expected, or defame the person”.

Section 500 of Indian Penal Code, that deals with the punishment of defamation, says, “Whoever defames another shall be punished with simple imprisonment for a term which may extend to two years, or with fine, or with both”.

The ruling came in the wake of the petition filed first by Subramanian Swamy, now a Rajya Sabha member, and a Bhartiya Janta Party politician against provisions, which criminalize defamation. Later, Congress Vice-President Rahul Gandhi and Delhi Chief Minister, who are facing criminal defamation proceedings, became party to the case. Now they have to face the charges initiated against then under the section making defamation a criminal offence..

The petition, challenging the constitutional validity of sections 409 and 500 of IPC, argued that both section went beyond the limitations interwoven in the Article 19(2) of the Constitution of India and, therefore, were cramping the freedom of speech beyond the fair limits.

Kernel Arguments against section 499 and 500 IPC

The main contention against sections 409 and 500 are that they are not fair in imposition of restriction on speech. The example provided for the contention is that if a person speaks truth, then truth is going to be defence if the statement is made for the public good. Otherwise, a person can be tried for defamation even for speaking truth.

Under these sections, a person can be prosecuted on the ground that s/he has conspired with the person who makes the defamatory statements; this is perhaps the reason, as the petitioners contended, that the people are reluctant while criticizing the Government or its officials as it could lead to a legal action.

Constitution’s Stand on Freedom of Speech

Clause 2 of the Article 19 of the Constitution permits States to make laws to prescribe fair restrictions on the right to free speech in the interests of sovereignty and integrity of India, security of the State…. etc. However, the Constitution too cautions that ‘the reasonable restrictions must not be arbitrary and excessive’…., if the restriction is too broad, then it will be unconstitutional’.

A bench comprising Justice Dipak Mishra and PC Pant dismissed demands to strike down Section 199(2) to (4) of Criminal Procedure Code. Objections were registered against the Vague terminology used in section 199 that make ‘aggrieved person’ file a defamation complaint opening the floodgates for frivolous litigations. On this the apex court merely said this would be determined by courts in each case as per the fact situation. The apex court also rejected the arguments that these have no rationale and do not bear constitutional scrutiny.

Giving sanctity to a public  servant’s right to use State’ machinery to pursue a defamation case against another citizen, the Supreme Court elaborated, “One is bound to tolerate criticism, dissent and discordance but not expected to tolerate defamatory attack”.