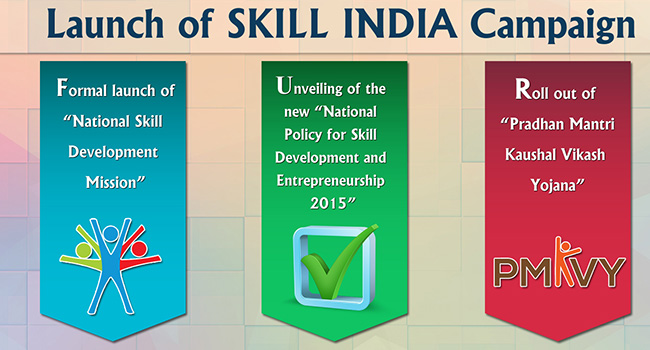 Skill India Mission, an initiative of the Government of India, was introduced by the Prime Minister Shri Narendra Modi on July 16, 2015. This mission intends to provide training to over 40 crore people having different skills by 2022 in India. The Mission consists of National policy for Skill Development and Entrepreneurship (NPSDE) 2015; Pradhan Mantri Kaushal Vikas yojna (PMKVY) scheme and the Skill Loan Scheme.

In order to survive in this highly technological world one must have some sort of skill. In this context India has been doing very poorly and faces a big challenge to remain in the race of becoming a developed country.

Recently, it has been estimated that only 4.69% of the total work force in India has got formal skill training as compared to 68% in UK; 75% Germany, 52% in USA; 80% in Japan; and 96% in South Korea. In this context one has to keep in mind the fact that the number of people who find a place in the work force age group every year is estimated to be 26.14 million.

Most of the previous skill development programmes have been scattered across more than 20 Ministries/Departments without any appropriate coordination and mechanism to ensure convergence.

The existing multiplicity in assessment and certification system has produced inconsistent results causing confusion to employers.

Lack of good quality of trainers is a major area of concern. It has been noticed that there has been empathy towards development of trainers training programmes.

In India the number of local entrepreneurs emerging every year is very low. It is important to know that India has been ranked 81 (out of 141 countries) by the Global Innovation index.

The Skill India Mission, in an attempt to address these serious affairs, has tried to bring the field of education and training closer to the arena of work in order to enable them build a strong India.

The Three Components of the Mission

The policy has the intention to create an ecosystem skilling on a large scale with high standards. It also aims to encourage a culture of innovation based entrepreneurship to secure sustainable livelihoods for all citizens of the country.

The Principal objective of the Policy is to enable the individual in realizing their full potential through a process of life-long learning where competencies are garnered via instruments and such as credible certifications, credit accumulation and transfer etc.

In order to make this idea functional the government, through the policy, has made it clear that it is going to make quality vocational training  aspirational for both youth and employers; to provide seamless integration of skill with formal education; to increase the capability and quality of training  infrastructure and trainers to assure equitable and easy access to every citizen of India and to set up an IT based information system for collecting demand and supply of skilled workforce that can assist in matching and linking supply with demand.

PMKVY is a flagship scheme of the new Ministry of Skill Development and Entrepreneurship (MSAE). It is a certification and reward scheme. The scheme aims to, being a part of the Skill India Mission, to enable and mobilize a large number of Indian youth to go through the skill training and become employable .

The Objective of this scheme is to promote skill development among youth by catering monetary rewards after successful completion of the sanctioned training programmes. The scheme intends: to encourage standardization in certification process and being a process of creating a registry of skill and to reward candidates who are getting skill training by authorized institutions at an average reward of Rs. 8,000 per candidate. It has an aim of providing skill training to 24 lakh youth in one year.

The Prime Minister initiated the Skill Loan Scheme, a part of Skill India Mission, with an intention to assist youth who desire to be a part of the Skill training programmes running in the country. Under this scheme Loans varying from Rs. 5,000 to 1.5 Lakh are going to be made available to 34 lakh youth of India who wish to attend the Skill Development Programmes over the next five years (that is by 2020).