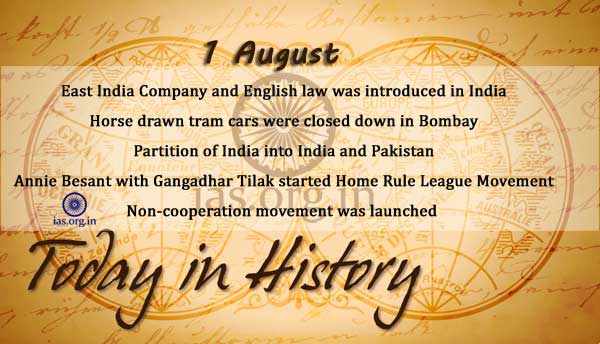 Italian explorer Christopher Columbus sets foot on the American mainland for the first time, at the Paria Peninsula in present-day Venezuela. Thinking it an island, he christened it Isla Santa and claimed it for Spain.

The East India Company and the English law was introduced in India for the first time. It was set up as it was directed by the Court of Judicature.

On this day in 1774, dissenting British minister Joseph Priestly, author of Observations on Civil Liberty and the Nature and Justice of the War with America, discovered oxygen.

Bipin Chandra Pal opposed to the Non Co-operation Movement and retired from politics, but movement was approved by Congress.

Under the leadership of Gandhi, the non-cooperation movement was launched against Lord Chelmsford. “Firmness in truth,” was his strategy of non cooperation and non-violence against India’s Christian British rulers. Later, he resolved to wear only ‘dhoti’ to preserve homespun cotton and simplicity, followed with grassroots agitation. This began with renunciation of honorary titles like ‘Sir’ given by the British. Thereafter, it was followed by the boycott of legislatures, elections and other Government works. Foreign clothes were burnt and Khadi became a symbol of freedom. The movement was a great success despite firing and arrests. By the end of 1921, all important national leaders, except Gandhi, were in jail, along with 3000 others. However, in February 1922, at Chaurichaura, Uttar Pradesh, violence erupted and Gandhi called off the movement.

All Private Airlines were nationalised by establishing of All Airlines India International.

Ramon Magsaysay Award for community leadership was given to Acharya Bhave.

Himachal Pradesh Krishi Vishvavidyalaya (HPKV) was established at Palampur under the aegis of Punjab Agricultural University, Ludhiana, to cater to the need of hilly areas of erstwhile Punjab.

A severe flood of the Red River in North Vietnam killed an estimated 100,000 people on this day in 1971. This remarkable flood was one of the century’s most serious weather events.

The United States, the Soviet Union, Canada and every European nation (except Albania) signed the Helsinki Final Act on the last day of the Conference on Security and Cooperation in Europe (CSCE). The act was intended to revive the sagging spirit of detente between the Soviet Union and the United States and its allies.

The Lok Sabha adopted Uttar Pradesh State Reorganisation Bill paving the way for the creation of Uttaranchal the 27th State.

On this day in 2007, Citibank opened China’s first drive-through automated teller machine (ATM) at the Upper East Side Central Plaza in Beijing.