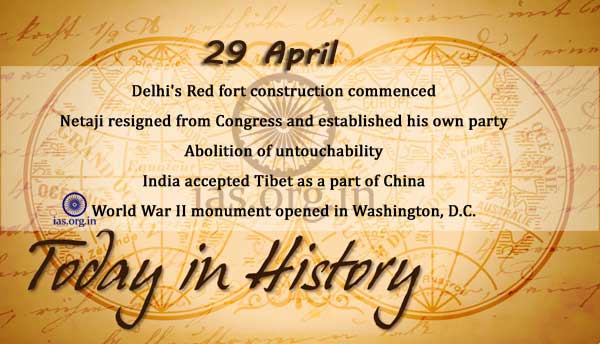 Delhi’s Red fort construction commenced by laying the Foundation Stone by Shah Jahan. This fort was completed on May 13, 1646.

Netaji resigned from the Congress and established his own party, the Forward Block, and created a political deadlock in India.

India accepted Tibet as a part of China.

The National Civil Defence College was founded at Nagpur as the Central Emergency Relief Training Institute (CERTI). It functions as the training wing of the Emergency Relief Organisation of the Government of India.

Raja Mahendra Pratap, great revolutionary freedom fighter, passed away in New Delhi at the age of 93.

A devastating cyclone hits Bangladesh, killing more than 135,000 people. Even though there had been ample warning of the coming storm and shelter provisions had been built in the aftermath of a deadly 1970 storm, this disaster was one of the worst of the 20th century.

India and Myanmar agree upon steps to ensure trans-border security, cooperation in the fight against trafficking of narcotics and implementation of mutually beneficial cross-border projects.

The Reserve Bank reduces the bank rate by one point from 10 per cent in its monetary and credit policy for the first half of 1998- 99.

The National World War II Memorial opened in Washington, D.C., to thousands of visitors, providing overdue recognition for the 16 million U.S. men and women who served in the war. The memorial is located on 7.4 acres on the former site of the Rainbow Pool at the National Mall between the Washington Monument and the Lincoln Memorial. The Capitol dome is seen to the east, and Arlington Cemetery is just across the Potomac River to the west.