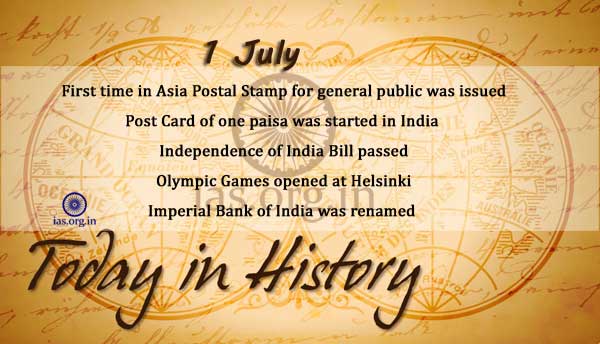 British troops defeated Hyder Ali’s progress. He was checked by Eyree Coote after the battle of Porto Novo and becamed subdued.

For the first time in Asia, Postal Stamp for the general public was issued by Sindh Province in Karachi.

In south, the first line was opened by the Madras Railway Company. It ran between Veyasarpandy and Walajah Road (Arcot), a distance of 63 miles.

Calcutta High Court was established for West Bengal and Andaman & Nicobar Islands. This Court has a Circuit Bench at Port Blair.

British Parliament passes the India Independence Act and fixes August 15 for the transfer of power.

Ravishankar Maharaj, freedom fighter and national leader of the country, died at the age of 101.

Major changes in Exim policy-farming and repacking included under the definition of ‘manufacturer’.

Previous articleINVENTIONS AND DISCOVERIES
Next articleToday in History – 2 July