Today in History – 1 May 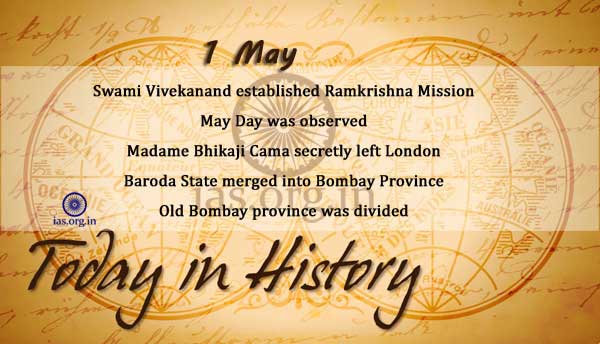 Madame Bhikaji Cama secretly left London and went to France where she was wrote and spoke about the cruelty of Britishers.

Under the leadership of Singaravelu Chettiar, the first May day was celebrated in India.

President Eisenhower proclaims Law Day to honor the role of law in the creation of the United States of America. Three years later, Congress followed suit by passing a joint resolution establishing May 1 as Law Day.

Old Bombay province was divided between Maharashtra and Gujrat States.

Ravishankar University was established at Raipur in Madhya Pradesh.

All fuel coal mines were nationalised.

The Konkan Railway running for 760-km is dedicated to the nation by Prime Minister Atal Bihari Vajpayee. This was an extention from Ratnagiri.

India and Peru sign agreements on space technology and agriculture during the visit of Indian President K. R. Narayanan there.