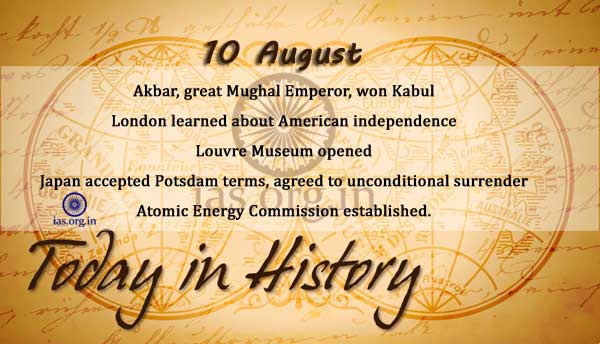 On this day in 1776, news reached London that the Americans had drafted the Declaration of Independence.

After more than two centuries as a royal palace, the Louvre was opened as a public museum in Paris by the French revolutionary government. Today, the Louvre’s collection is one of the richest in the world, with artwork and artifacts representative of 11,000 years of human civilization and culture.

Missouri entered the Union as the 24th state–and be the first located entirely west of the Mississippi River.

Vishnu Narayan Bhatkhande, the great architect of the renaissance of Hindustani music and who played a vital role in giving re-birth to North Indian classical music, was born at Balukeshwar, Maharashtra.

Varahagiri Venkata Giri, the fourth former President of India, was born at Berhampur in Orissa. He was one of the patriarchs of Trade Union Movement of India.

In the ‘Gandhi Cap Case’ in Guntur, the magistrate prohibited wearing of Gandhi caps within a five-mile radius of the town.

On this day in 1945, just a day after the bombing of Nagasaki, Japan submited its acquiescence to the Potsdam Conference terms of unconditional surrender, as President Harry S. Truman ordered a halt to atomic bombing.

Panchayatraj’ and ‘Nagarpalika’ bills were passed in Parliament‘s Lok Sabha.

A rare collision of three ships in Tampa Bay, Florida, resulted in a spill of 336,000 gallons of fuel oil on this day in 1993. Fortunately, a combination of favorable weather conditions and preparedness kept the damage to a minimum.

On this day in 2003, the United Kingdom recorded its first-ever temperature over 100 degrees Fahrenheit. Throughout the month, an intense heat wave scorched the European continent, claiming more than 35,000 lives.