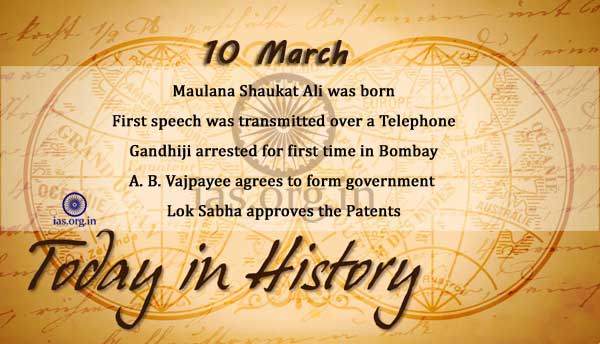 On this day, the first discernible speech is transmitted over a telephone system when inventor Alexander Graham Bell summons his assistant in another room by saying, “Mr. Watson, come here; I want you.” Bell had received a comprehensive telephone patent just three days before.

Savitri Bai Phule passed away. She played a prominent role in assisting her husband Mahatma Jyotirao Govindrao Phule in education field. She taught in schools for girls and for downtroddens and untouchables.

Gandhiji arrested for the first time in Bombay on the charges of sedition at Sabarmati.

The history of 104 HU, the most prestigious and the oldest Helicopter Unit of the IAF, is studded with more than four decades of glorious past and yeomen service rendered to the country. One-O-Four was raised as Helicopter Flight at Palam on 10th March 1954.

Parliament passed the Act that made Central Industrial Security Force as an Armed Force of the union.

A. B. Vajpayee agrees to form a government with 252 members including the BJP and it’s allies.