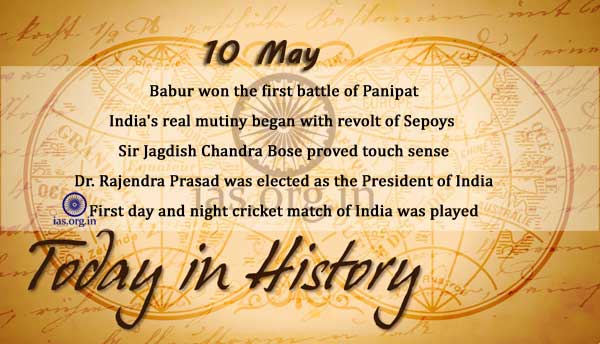 India’s real mutiny begins with the revolt of Sepoys of Meerut near Delhi the next day.

On this day in 1869, the presidents of the Union Pacific and Central Pacific railroads met in Promontory, Utah, and drove a ceremonial last spike into a rail line that connected their railroads. This made transcontinental railroad travel possible for the first time in U.S. history. No longer would western-bound travellers need to take the long and dangerous journey by wagon train, and the West would surely lose some of its wild charm with the new connection to the civilized East.

Sir Jagdish Chandra Bose, Indian scientist, in the hall of the Royal Society, London, which was packed with eminent scientists on May 10, 1901 proved that “plants and animal have similar touch sense”

Winston Churchill, First Lord of the Admiralty, was called to replace Neville Chamberlain as British prime minister following the latter’s resignation after losing a confidence vote in the House of Commons.

Dr. Rajendra Prasad was elected as the President of India for a second term.

Karnataka Kranti Ranga led by Devaraj Urs comes into being.

Santosh Yadav became the first Indian woman to reach the Everest for the second time.

In South Africa, Nelson Rolihlahla Mandela was sworn in as the first black president of South Africa. In his inaugural address, Mandela, who spent 27 years of his life as a political prisoner of the South African government, declared that “the time for the healing of the wounds has come.” Two weeks earlier to this event, more than 22 million South Africans had turned out to cast ballots in the country’s first-ever multiracial parliamentary elections. An overwhelming majority chose Mandela and his African National Congress (ANC) party to lead the country.

Eight climbers died on Mount Everest during a storm on this day in 1996. It was the worst loss of life ever on the mountain on a single day. Author Jon Krakauer, who himself attempted to climb the peak that year, wrote a best-selling book about the incident, Into Thin Air, which was published in 1997. A total of 15 people perished during the spring 1996 climbing season at Everest. Between 1980 and 2002, 91 climbers died during the attempt.

Today in History – 7 May