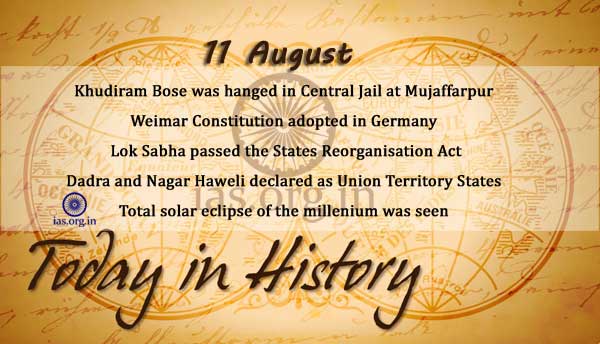 Allau’d-din Hasan Gangu alias Jafar Khan. The Muslim kingdom of Bahmani dynasty in the south as Sultan Allau’d-din Khalji. He renamed Gulbarga, his capital as ‘Hasanabad’.

A hurricane hits the Louisiana coast, killed more than 400 people. Isle Derniere, a resort community, was totally submerged by the storm surges.

Khudiram Bose was hanged on this day in Central Jail at Mujaffarpur, Bihar at the age of 19 years. He along with Prafulla Chaki had planned to bomb the carriage supposed to be carrying Kingsford, unfortunately he was betrayed and was caught and finally was sentenced to death and hanged. This day is observed as “Martyr’s Day” in memory of the great freedom fighter. Even today the soul stirring songs composed in his honour are sung by Bengali folk-singer.

Friedrich Ebert, a member of the Social Democratic Party and the provisional president of the German Reichstag (government), signed a new constitution, known as the Weimar Constitution, into law, officially creating the first parliamentary democracy in Germany.

On this day in 1943, German forces began a six-day evacuation of the Italian island of Sicily, having been beaten back by the Allies, who invaded the island in July.

Like any style of music, hip hop has roots in other forms, and its evolution was shaped by many different artists, but there’s a case to be made that it came to life precisely on this day in 1973, at a birthday party in the recreation room of an apartment building in the west Bronx, New York City. The location of that birthplace was 1520 Sedgwick Avenue, and the man who presided over that historic party was the birthday girl’s brother, Clive Campbell—better known to history as DJ Kool Herc, founding father of hip hop.

A small cloud of toxic chemicals escaped from a Union Carbide plant near Charleston, West Virginia, this morning, and at least 135 residents were treated for eye, throat, and lung irritation. Last December, methyl isocyanate gas escaped from a Union Carbide plant in India, killing 2,000 people. No MIC escaped today, plant officials said. Aldicarb oxime, a much less toxic gas, is declared as one constituent of the gas cloud.

The last total solar eclipse of the millenium was seen in northern parts of India and France. This eclipse lasted for 2 min and 23 sec.

Koneru Humpy was crowned the youngest British Ladies chess champion at the end of eleventh and final round in the Smith and Williamson British chess championship in Somerset.

The World Bank signed an agreement for a $713 million aid to India for three infrastructure projects.