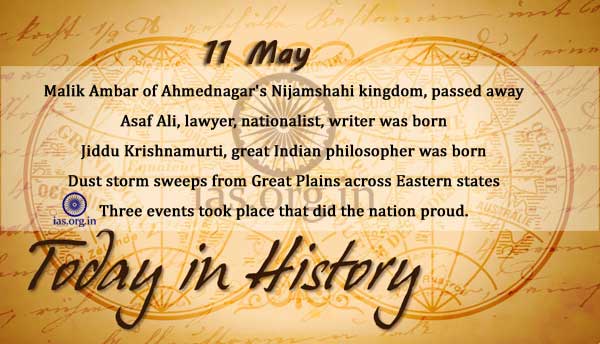 Asaf Ali, lawyer, nationalist, writer and connoisseur of music and arts, was born.

Jiddu Krishnamurti, great Indian philosopher of international repute, was born at Madanapalle, Andhra Predesh. His famous book “Song of Life” contains most of his philosophical thoughts and teachings.

Troops under General Barrett inflicted a sharp reverse on the invading Afghans at Bagh Springs. The whole of the frontier area was up in arms with tribesmen threatening Landi Khotal and martial law had been proclaimed in Peshawar. It was expected however that General Barrett, well equipped with guns and airplanes, would soon control the situation. Reports had been reaching London for some time about the possibility of an Afghan incursion following the murder of the pro-British Emir Habibullah. His third son, Amanullah Khan, who took over the throne, was known to be hostile toward the government of India.

On this day in 1934, a massive storm sent millions of tons of topsoil flying from across the parched Great Plains region of the United States as far east as New York, Boston and Atlanta.

The first of two cyclones in less than a month killed 35,000 people in the country.

A bill for setting up of “North Eastern Council” was passed.

Three momentous events took place on the day that did the nation proud. Firstly, three underground nuclear tests at Pokhran Range in Rajasthan, which included a hydrogen bomb, were tested; secondly, the successful test firing of the ‘Trishul Missile‘ and thirdly, the maiden Certification test flight of ‘Hansa-3’, the first-all Composite indigenous two seater aircraft.

Supreme Court confirmed the death sentence on four of the 26 accused in the Rajiv Gandhi assassination case, reduced to life imprisonment the sentence on three others and acquits the remaining 19.

Today in History – 7 May