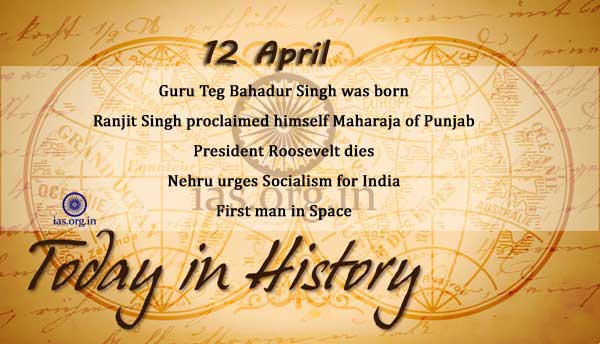 The Church Missionary Society was organized in London under the original name of the Society for Missions in Africa and the East. This Anglican missions agency currently works in fields located in Africa, Ceylon, India, Pakistan, Iran and Palestine.

William Carey fort was appointed the Professor of Bengali Language in fort at William College, Calcutta.

Nehru pledges ‘no surrender’ to the Axis despite the rejection of Britain’s plans at New Delhi.

While on a vacation in Warm Springs, Georgia, President Roosevelt suffers a stroke and dies. His death marked a critical turning point in U.S. relations with the Soviet Union, as his successor, Harry S. Truman, decided to take a tougher stance with the Russians.

On April 12, 1961, aboard the spacecraft Vostok 1, Soviet cosmonaut Yuri Alekseyevich Gagarin becomes the first human being to travel into space. During the flight, the 27-year-old test pilot and industrial technician also became the first man to orbit the planet, a feat accomplished by his space capsule in 89 minutes. Vostok 1 orbited Earth at a maximum altitude of 187 miles and was guided entirely by an automatic control system. The only statement attributed to Gagarin during his one hour and 48 minutes in space was, “Flight is proceeding normally; I am well.”

After several state victories, Congress party-I (for Indira) is recognized as official opposition.

India’s first double decker train was started between Victoria Terminus (CST) and Pune which beared the name as “”Janta Express””, which is now known under the name of Shivaji’s fort as “”Singhgarh Expr

The space shuttle Columbia is launched from Cape Canaveral, Florida, becoming the first reusable manned spacecraft to travel into space. Piloted by astronauts Robert L. Crippen and John W. Young, the Columbia undertook a 54-hour space flight of 36 orbits before successfully touching down at California’s Edwards Air Force Base on April 14.

The 350-tonne Buddha statue salvaged from the Hussain Sagar where it had sunk in 1990.