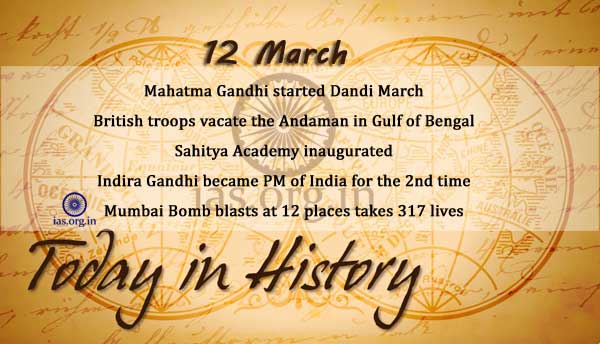 Mahatma Gandhi started Dandi March from Sabarmati Ashram near Ahmedabad to break salt law. This march stretched of 375 km. was covered in 26 days with 78 followers. The whole of India joined the campaign to boycott foreign goods and refused to pay taxes. Khan Abdul Ghafar Khan or Frontier Gandhi started Khudai Kidmatgar movement in the North-West Frontier. The Government went back to its brutal force and about 90,000 people were imprisoned within a year. In Peshawar, the Gharwal regiment refused to shoot a demonstrator. In Nagaland Rani Gaidilita, a 13 year old girl raised the flag against the Britishers and was put into life imprisonment in 1932. Nehru hearing this uttered A day will come when India will remember her and Cherish her. She was released after Independence.

British troops vacate the Andaman in Gulf of Bengal.

Indira Gandhi became Prime Minister of India for the second time after winning the General Elections.

Reactor Research Centre established at Kalpakkam. On 18th December 1985, it was renamed as Indira Gandhi Centre for Atomic Research.

A devastating wave of car-bomb explosions killed an estimated 300 people and injured hundreds more today in the large western Indian port city of Bombay. The first blast ripped through the city’s stock exchange building, and minutes later a dozen slightly less powerful explosions rocked the bustling city center. The bomb attacks appeared to have been part of a carefully planned operation.The devices were clearly meant to cause maximum loss of life and damage to property.