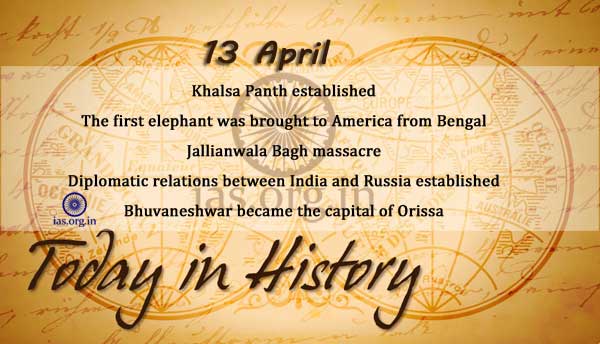 Warren Hastings, who became the president of their Bengal Council, was appointed in the court of Directors of the East India Company.

The first elephant was brought to America from Bengal, India.

Jallianwala Bagh massacre. The great Indian tragedy occured in Amritsar which claimed 389 lives and wounded 1,516 activitists fighting for Indian independence. Early in 1919, the Rowlatt Act (Black Act) was passed. This authorized the Government to imprison any person without any trial and conviction in a court of law. This furious act was under the guidence of cruel Brigedier General R. E. H. Dyer and his 50 men troop. Michael O’ Dwyer was then the Governor of Punjab who naturally defended the action. This day is observed as Jallianwala Baug Day.

Bhuvaneshwar became the capital of Orissa.

Mother Teresa asks Margret Thatcher for help to set up a hostel for London’s elderly homeless in UK.

21-year-old Tiger Woods wins the prestigious Masters Tournament by a record 12 strokes in Augusta, Georgia. It was Woods’ first victory in one of golf’s four major championships–the U.S. Open, the British Open, the PGA Championship, and the Masters–and the greatest performance by a professional golfer in more than a century.